Our extensive research has shown that imitating the smart money can generate significant returns for retail investors, which is why we track nearly 750 active prominent money managers and analyze their quarterly 13F filings. The stocks that are heavily bought by hedge funds historically outperformed the market, though there is no shortage of high profile failures like hedge funds’ 2018 losses in Facebook and Apple. Let’s take a closer look at what the funds we track think about Solaredge Technologies Inc (NASDAQ:SEDG) in this article.

Is Solaredge Technologies Inc (NASDAQ:SEDG) a sound investment now? The best stock pickers are becoming more confident. The number of long hedge fund bets increased by 1 in recent months. Our calculations also showed that SEDG isn’t among the 30 most popular stocks among hedge funds (view video below).

Heading into the third quarter of 2019, a total of 23 of the hedge funds tracked by Insider Monkey held long positions in this stock, a change of 5% from one quarter earlier. Below, you can check out the change in hedge fund sentiment towards SEDG over the last 16 quarters. So, let’s find out which hedge funds were among the top holders of the stock and which hedge funds were making big moves. 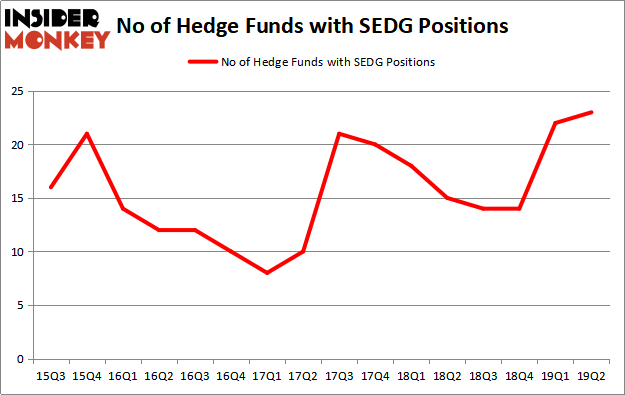 The largest stake in Solaredge Technologies Inc (NASDAQ:SEDG) was held by Noked Capital, which reported holding $38.6 million worth of stock at the end of March. It was followed by Rima Senvest Management with a $21.7 million position. Other investors bullish on the company included Renaissance Technologies, Citadel Investment Group, and Millennium Management.

With a general bullishness amongst the heavyweights, specific money managers were leading the bulls’ herd. Lakewood Capital Management, managed by Anthony Bozza, assembled the most valuable position in Solaredge Technologies Inc (NASDAQ:SEDG). Lakewood Capital Management had $10.3 million invested in the company at the end of the quarter. Richard Driehaus’s Driehaus Capital also made a $4.8 million investment in the stock during the quarter. The other funds with brand new SEDG positions are Brian Olson, Baehyun Sung, and Jamie Waters’s Blackstart Capital, Principal Global Investors’s Columbus Circle Investors, and Philip Hempleman’s Ardsley Partners.

As you can see these stocks had an average of 16.5 hedge funds with bullish positions and the average amount invested in these stocks was $429 million. That figure was $146 million in SEDG’s case. Iovance Biotherapeutics, Inc. (NASDAQ:IOVA) is the most popular stock in this table. On the other hand Manchester United PLC (NYSE:MANU) is the least popular one with only 10 bullish hedge fund positions. Compared to these stocks Solaredge Technologies Inc (NASDAQ:SEDG) is more popular among hedge funds. Our calculations showed that top 20 most popular stocks among hedge funds returned 24.4% in 2019 through September 30th and outperformed the S&P 500 ETF (SPY) by 4 percentage points. Hedge funds were also right about betting on SEDG as the stock returned 34% during Q3 and outperformed the market by an even larger margin. Hedge funds were clearly right about piling into this stock relative to other stocks with similar market capitalizations.