Hedge Funds Have Never Been This Bullish On Smartsheet Inc. (SMAR)

We can judge whether Smartsheet Inc. (NYSE:SMAR) is a good investment right now by following the lead of some of the best investors in the world and piggybacking their ideas. There’s no better way to get these firms’ immense resources and analytical capabilities working for us than to follow their lead into their best ideas. While not all of these picks will be winners, our research shows that these picks historically outperformed the market when we factor in known risk factors.

Smartsheet Inc. (NYSE:SMAR) investors should pay attention to an increase in enthusiasm from smart money lately. Our calculations also showed that SMAR isn’t among the 30 most popular stocks among hedge funds.

Unlike some fund managers who are betting on Dow reaching 40000 in a year, our long-short investment strategy doesn’t rely on bull markets to deliver double digit returns. We only rely on hedge fund buy/sell signals. Let’s take a gander at the new hedge fund action surrounding Smartsheet Inc. (NYSE:SMAR). 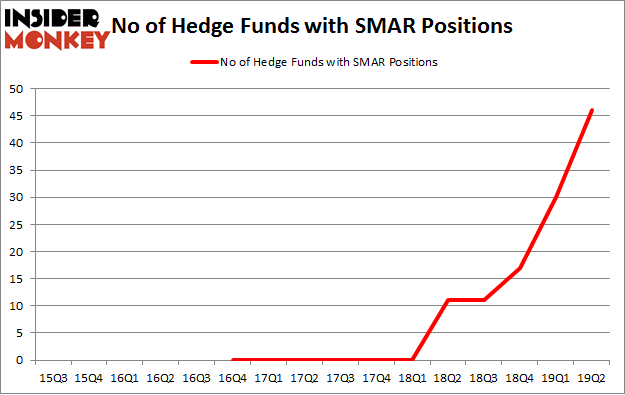 Of the funds tracked by Insider Monkey, Alex Sacerdote’s Whale Rock Capital Management has the number one position in Smartsheet Inc. (NYSE:SMAR), worth close to $243.5 million, comprising 4.2% of its total 13F portfolio. Sitting at the No. 2 spot is Chase Coleman of Tiger Global Management LLC, with a $109.1 million position; 0.6% of its 13F portfolio is allocated to the company. Some other members of the smart money that are bullish encompass Colin Moran’s Abdiel Capital Advisors, Philippe Laffont’s Coatue Management and Panayotis Takis Sparaggis’s Alkeon Capital Management.

With a general bullishness amongst the heavyweights, key hedge funds were breaking ground themselves. Abdiel Capital Advisors, managed by Colin Moran, created the largest position in Smartsheet Inc. (NYSE:SMAR). Abdiel Capital Advisors had $108.7 million invested in the company at the end of the quarter. Philippe Laffont’s Coatue Management also made a $99.4 million investment in the stock during the quarter. The other funds with new positions in the stock are Glen Kacher’s Light Street Capital, James Crichton’s Hitchwood Capital Management, and Brian Ashford-Russell and Tim Woolley’s Polar Capital.

As you can see these stocks had an average of 23.25 hedge funds with bullish positions and the average amount invested in these stocks was $584 million. That figure was $1485 million in SMAR’s case. Avalara, Inc. (NYSE:AVLR) is the most popular stock in this table. On the other hand Ultrapar Participacoes SA (NYSE:UGP) is the least popular one with only 7 bullish hedge fund positions. Compared to these stocks Smartsheet Inc. (NYSE:SMAR) is more popular among hedge funds. Our calculations showed that top 20 most popular stocks among hedge funds returned 24.4% in 2019 through September 30th and outperformed the S&P 500 ETF (SPY) by 4 percentage points. Unfortunately SMAR wasn’t nearly as popular as these 20 stocks and hedge funds that were betting on SMAR were disappointed as the stock returned -25.6% during the third quarter and underperformed the market. If you are interested in investing in large cap stocks with huge upside potential, you should check out the top 20 most popular stocks (view the video below) among hedge funds as many of these stocks already outperformed the market in Q3.