After several tireless days we have finished crunching the numbers from nearly 750 13F filings issued by the elite hedge funds and other investment firms that we track at Insider Monkey, which disclosed those firms’ equity portfolios as of June 28. The results of that effort will be put on display in this article, as we share valuable insight into the smart money sentiment towards Seaboard Corporation (NYSEAMEX:SEB).

Seaboard Corporation (NYSEAMEX:SEB) investors should pay attention to an increase in hedge fund interest of late. Our calculations also showed that SEB isn’t among the 30 most popular stocks among hedge funds (see the video below).

To the average investor there are a multitude of methods stock market investors put to use to evaluate publicly traded companies. A pair of the less utilized methods are hedge fund and insider trading activity. Our experts have shown that, historically, those who follow the top picks of the top investment managers can beat the S&P 500 by a healthy margin (see the details here).

Unlike former hedge manager, Dr. Steve Sjuggerud, who is convinced Dow will soar past 40000, our long-short investment strategy doesn’t rely on bull markets to deliver double digit returns. We only rely on hedge fund buy/sell signals. Let’s take a look at the fresh hedge fund action regarding Seaboard Corporation (NYSEAMEX:SEB).

What does smart money think about Seaboard Corporation (NYSEAMEX:SEB)?

At Q2’s end, a total of 16 of the hedge funds tracked by Insider Monkey were long this stock, a change of 45% from the first quarter of 2019. The graph below displays the number of hedge funds with bullish position in SEB over the last 16 quarters. With hedgies’ capital changing hands, there exists an “upper tier” of key hedge fund managers who were adding to their holdings considerably (or already accumulated large positions). 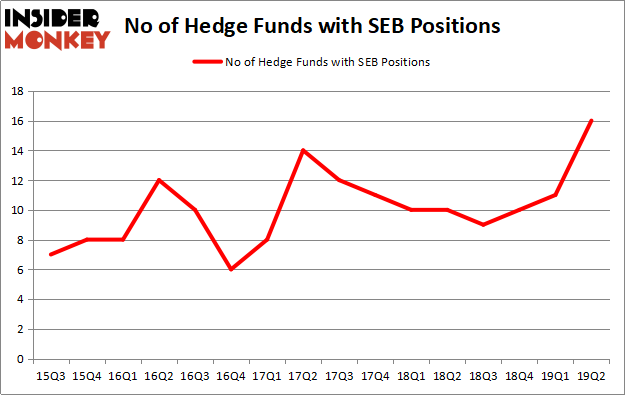 As industrywide interest jumped, some big names were breaking ground themselves. Kahn Brothers, managed by Irving Kahn, initiated the biggest position in Seaboard Corporation (NYSEAMEX:SEB). Kahn Brothers had $54.8 million invested in the company at the end of the quarter. Clint Carlson’s Carlson Capital also made a $2 million investment in the stock during the quarter. The following funds were also among the new SEB investors: Ken Griffin’s Citadel Investment Group, Frederick DiSanto’s Ancora Advisors, and Brian C. Freckmann’s Lyon Street Capital.

As you can see these stocks had an average of 24.75 hedge funds with bullish positions and the average amount invested in these stocks was $341 million. That figure was $137 million in SEB’s case. The Stars Group Inc. (NASDAQ:TSG) is the most popular stock in this table. On the other hand Black Hills Corporation (NYSE:BKH) is the least popular one with only 16 bullish hedge fund positions. Compared to these stocks Seaboard Corporation (NYSEAMEX:SEB) is even less popular than BKH. Hedge funds clearly dropped the ball on SEB as the stock delivered strong returns, though hedge funds’ consensus picks still generated respectable returns. Our calculations showed that top 20 most popular stocks among hedge funds returned 24.4% in 2019 through September 30th and outperformed the S&P 500 ETF (SPY) by 4 percentage points. A small number of hedge funds were also right about betting on SEB as the stock returned 5.8% during the third quarter and outperformed the market by an even larger margin.