Hedge Funds Have Never Been This Bullish On Sea Limited (SE)

Is Sea Limited (NYSE:SE) a good place to invest some of your money right now? We can gain invaluable insight to help us answer that question by studying the investment trends of top investors, who employ world-class Ivy League graduates, who are given immense resources and industry contacts to put their financial expertise to work. The top picks of these firms have historically outperformed the market when we account for known risk factors, making them very valuable investment ideas.

Sea Limited (NYSE:SE) investors should be aware of an increase in hedge fund sentiment of late. Our calculations also showed that SE isn’t among the 30 most popular stocks among hedge funds.

Unlike some fund managers who are betting on Dow reaching 40000 in a year, our long-short investment strategy doesn’t rely on bull markets to deliver double digit returns. We only rely on hedge fund buy/sell signals. Let’s view the latest hedge fund action regarding Sea Limited (NYSE:SE).

How have hedgies been trading Sea Limited (NYSE:SE)? 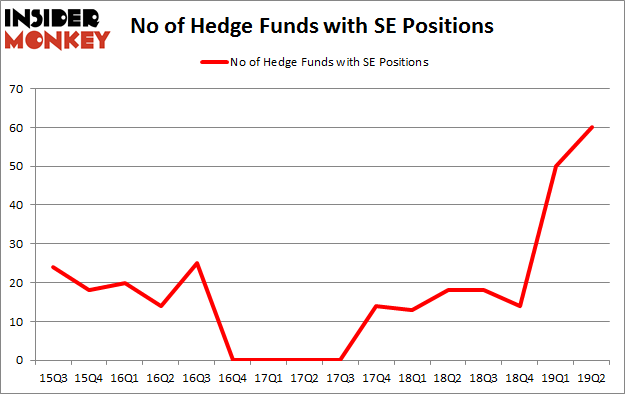 The largest stake in Sea Limited (NYSE:SE) was held by Tiger Global Management LLC, which reported holding $451.7 million worth of stock at the end of March. It was followed by Hillhouse Capital Management with a $254.4 million position. Other investors bullish on the company included Jericho Capital Asset Management, Lone Pine Capital, and Alkeon Capital Management.

With a general bullishness amongst the heavyweights, key money managers were breaking ground themselves. Sachem Head Capital, managed by Scott Ferguson, created the biggest position in Sea Limited (NYSE:SE). Sachem Head Capital had $86.9 million invested in the company at the end of the quarter. Alex Sacerdote’s Whale Rock Capital Management also initiated a $72.7 million position during the quarter. The other funds with new positions in the stock are Beeneet Kothari’s Tekne Capital Management, Leon Shaulov’s Maplelane Capital, and Louis Bacon’s Moore Global Investments.

As you can see these stocks had an average of 33.75 hedge funds with bullish positions and the average amount invested in these stocks was $1782 million. That figure was $3338 million in SE’s case. CarMax Inc (NYSE:KMX) is the most popular stock in this table. On the other hand Apollo Global Management, Inc. (NYSE:APO) is the least popular one with only 23 bullish hedge fund positions. Compared to these stocks Sea Limited (NYSE:SE) is more popular among hedge funds. Our calculations showed that top 20 most popular stocks among hedge funds returned 24.4% in 2019 through September 30th and outperformed the S&P 500 ETF (SPY) by 4 percentage points. Unfortunately SE wasn’t nearly as popular as these 20 stocks and hedge funds that were betting on SE were disappointed as the stock returned -6.8% during the third quarter and underperformed the market. If you are interested in investing in large cap stocks with huge upside potential, you should check out the top 20 most popular stocks (view the video below) among hedge funds as many of these stocks already outperformed the market in Q3.