Like everyone else, elite investors make mistakes. Some of their top consensus picks, such as Amazon, Facebook and Alibaba, have not done well in Q4 due to various reasons. Nevertheless, the data show elite investors’ consensus picks have done well on average over the long-term. The top 20 stocks among hedge funds beat the S&P 500 Index ETF by 4 percentage points so far this year. Because their consensus picks have done well, we pay attention to what elite funds think before doing extensive research on a stock. In this article, we take a closer look at Scholar Rock Holding Corporation (NASDAQ:SRRK) from the perspective of those elite funds.

Is Scholar Rock Holding Corporation (NASDAQ:SRRK) the right investment to pursue these days? Investors who are in the know are getting more optimistic. The number of long hedge fund positions increased by 3 recently. Our calculations also showed that SRRK isn’t among the 30 most popular stocks among hedge funds (see the video below). SRRK was in 8 hedge funds’ portfolios at the end of June. There were 5 hedge funds in our database with SRRK holdings at the end of the previous quarter. 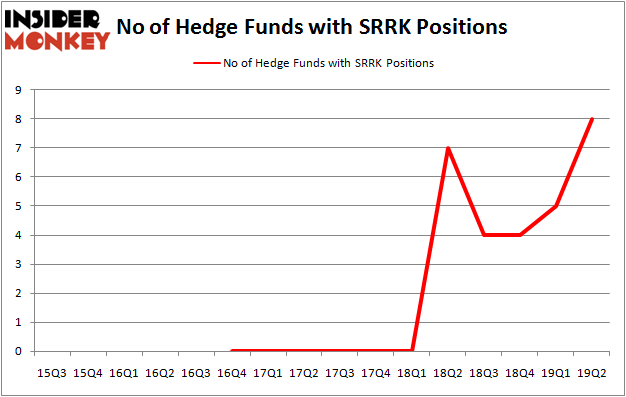 How have hedgies been trading Scholar Rock Holding Corporation (NASDAQ:SRRK)?

Heading into the third quarter of 2019, a total of 8 of the hedge funds tracked by Insider Monkey were long this stock, a change of 60% from the previous quarter. Below, you can check out the change in hedge fund sentiment towards SRRK over the last 16 quarters. With the smart money’s sentiment swirling, there exists a select group of notable hedge fund managers who were upping their stakes significantly (or already accumulated large positions).

More specifically, Redmile Group was the largest shareholder of Scholar Rock Holding Corporation (NASDAQ:SRRK), with a stake worth $46.3 million reported as of the end of March. Trailing Redmile Group was Cormorant Asset Management, which amassed a stake valued at $2.4 million. Alyeska Investment Group, Marshall Wace LLP, and Magnetar Capital were also very fond of the stock, giving the stock large weights in their portfolios.

With a general bullishness amongst the heavyweights, some big names were leading the bulls’ herd. Alyeska Investment Group, managed by Anand Parekh, assembled the most outsized position in Scholar Rock Holding Corporation (NASDAQ:SRRK). Alyeska Investment Group had $1.9 million invested in the company at the end of the quarter. Alec Litowitz and Ross Laser’s Magnetar Capital also made a $0.4 million investment in the stock during the quarter. The following funds were also among the new SRRK investors: Ken Griffin’s Citadel Investment Group, Paul Tudor Jones’s Tudor Investment Corp, and Gavin Saitowitz and Cisco J. del Valle’s Springbok Capital.

As you can see these stocks had an average of 9.75 hedge funds with bullish positions and the average amount invested in these stocks was $73 million. That figure was $53 million in SRRK’s case. Penn Virginia Corporation (NASDAQ:PVAC) is the most popular stock in this table. On the other hand Oxford Lane Capital Corp. (NASDAQ:OXLC) is the least popular one with only 3 bullish hedge fund positions. Scholar Rock Holding Corporation (NASDAQ:SRRK) is not the least popular stock in this group but hedge fund interest is still below average. This is a slightly negative signal and we’d rather spend our time researching stocks that hedge funds are piling on. Our calculations showed that top 20 most popular stocks among hedge funds returned 24.4% in 2019 through September 30th and outperformed the S&P 500 ETF (SPY) by 4 percentage points. Unfortunately SRRK wasn’t nearly as popular as these 20 stocks (hedge fund sentiment was quite bearish); SRRK investors were disappointed as the stock returned -43.6% during the third quarter and underperformed the market. If you are interested in investing in large cap stocks with huge upside potential, you should check out the top 20 most popular stocks among hedge funds as many of these stocks already outperformed the market so far in 2019.