Hedge Funds Have Never Been This Bullish On RPM International Inc. (RPM)

Out of thousands of stocks that are currently traded on the market, it is difficult to identify those that will really generate strong returns. Hedge funds and institutional investors spend millions of dollars on analysts with MBAs and PhDs, who are industry experts and well connected to other industry and media insiders on top of that. Individual investors can piggyback the hedge funds employing these talents and can benefit from their vast resources and knowledge in that way. We analyze quarterly 13F filings of nearly 750 hedge funds and, by looking at the smart money sentiment that surrounds a stock, we can determine whether it has the potential to beat the market over the long-term. Therefore, let’s take a closer look at what smart money thinks about RPM International Inc. (NYSE:RPM).

RPM International Inc. (NYSE:RPM) has experienced an increase in hedge fund sentiment of late. RPM was in 32 hedge funds’ portfolios at the end of September. There were 25 hedge funds in our database with RPM positions at the end of the previous quarter. Our calculations also showed that RPM isn’t among the 30 most popular stocks among hedge funds (click for Q3 rankings and see the video below for Q2 rankings).

Unlike the largest US hedge funds that are convinced Dow will soar past 40,000 or the world’s most bearish hedge fund that’s more convinced than ever that a crash is coming, our long-short investment strategy doesn’t rely on bull or bear markets to deliver double digit returns. We only rely on the best performing hedge funds‘ buy/sell signals. Let’s view the key hedge fund action regarding RPM International Inc. (NYSE:RPM).

How have hedgies been trading RPM International Inc. (NYSE:RPM)?

At the end of the third quarter, a total of 32 of the hedge funds tracked by Insider Monkey held long positions in this stock, a change of 28% from the previous quarter. Below, you can check out the change in hedge fund sentiment towards RPM over the last 17 quarters. So, let’s review which hedge funds were among the top holders of the stock and which hedge funds were making big moves. 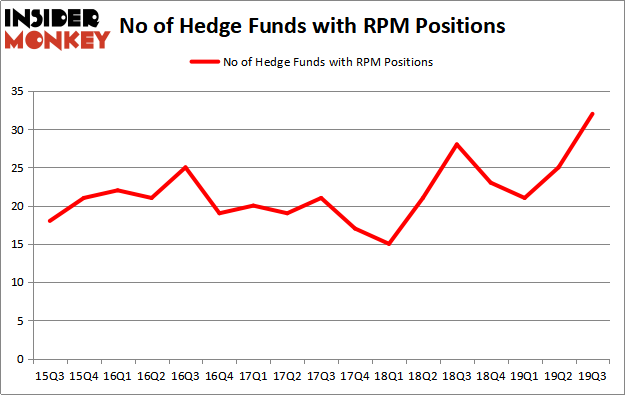 Among these funds, Hound Partners held the most valuable stake in RPM International Inc. (NYSE:RPM), which was worth $110.1 million at the end of the third quarter. On the second spot was Diamond Hill Capital which amassed $79.2 million worth of shares. Millennium Management, Samlyn Capital, and Balyasny Asset Management were also very fond of the stock, becoming one of the largest hedge fund holders of the company. In terms of the portfolio weights assigned to each position SAYA Management allocated the biggest weight to RPM International Inc. (NYSE:RPM), around 9.33% of its portfolio. Hound Partners is also relatively very bullish on the stock, earmarking 7 percent of its 13F equity portfolio to RPM.

Now, key hedge funds were breaking ground themselves. Moore Global Investments, managed by Louis Bacon, established the most outsized position in RPM International Inc. (NYSE:RPM). Moore Global Investments had $6.5 million invested in the company at the end of the quarter. Ben Levine, Andrew Manuel and Stefan Renold’s LMR Partners also made a $3.7 million investment in the stock during the quarter. The other funds with brand new RPM positions are Vince Maddi and Shawn Brennan’s SIR Capital Management, Paul Marshall and Ian Wace’s Marshall Wace, and Matthew Tewksbury’s Stevens Capital Management.

As you can see these stocks had an average of 21.25 hedge funds with bullish positions and the average amount invested in these stocks was $397 million. That figure was $410 million in RPM’s case. Bright Horizons Family Solutions Inc (NYSE:BFAM) is the most popular stock in this table. On the other hand Brookfield Property Partners LP (NASDAQ:BPY) is the least popular one with only 8 bullish hedge fund positions. Compared to these stocks RPM International Inc. (NYSE:RPM) is more popular among hedge funds. Our calculations showed that top 20 most popular stocks among hedge funds returned 37.4% in 2019 through the end of November and outperformed the S&P 500 ETF (SPY) by 9.9 percentage points. Hedge funds were also right about betting on RPM, though not to the same extent, as the stock returned 7.7% during the fourth quarter (through the end of November) and outperformed the market as well.