The financial regulations require hedge funds and wealthy investors that crossed the $100 million equity holdings threshold to file a report that shows their positions at the end of every quarter. Even though it isn’t the intention, these filings to a certain extent level the playing field for ordinary investors. The latest round of 13F filings disclosed the funds’ positions on June 28th. We at Insider Monkey have made an extensive database of nearly 750 of those established hedge funds and famous value investors’ filings. In this article, we analyze how these elite funds and prominent investors traded Retail Opportunity Investments Corp (NASDAQ:ROIC) based on those filings.

Retail Opportunity Investments Corp (NASDAQ:ROIC) shareholders have witnessed an increase in activity from the world’s largest hedge funds lately. ROIC was in 13 hedge funds’ portfolios at the end of the second quarter of 2019. There were 8 hedge funds in our database with ROIC positions at the end of the previous quarter. Our calculations also showed that ROIC isn’t among the 30 most popular stocks among hedge funds (see the video below).

At the end of the second quarter, a total of 13 of the hedge funds tracked by Insider Monkey held long positions in this stock, a change of 63% from the previous quarter. Below, you can check out the change in hedge fund sentiment towards ROIC over the last 16 quarters. With hedgies’ capital changing hands, there exists a few key hedge fund managers who were adding to their stakes meaningfully (or already accumulated large positions). 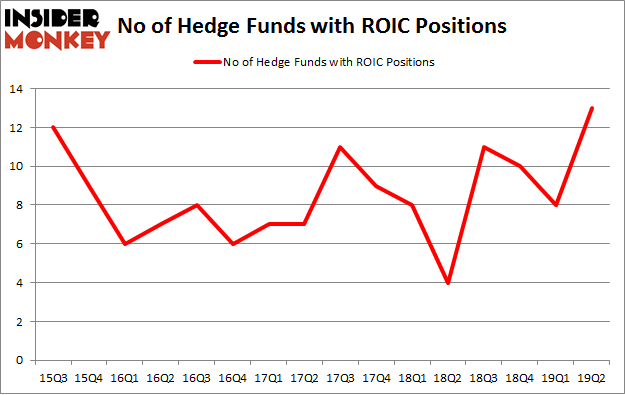 When looking at the institutional investors followed by Insider Monkey, Ken Heebner’s Capital Growth Management has the number one position in Retail Opportunity Investments Corp (NASDAQ:ROIC), worth close to $35.4 million, corresponding to 2.5% of its total 13F portfolio. The second most bullish fund manager is Dmitry Balyasny of Balyasny Asset Management, with a $21.6 million position; the fund has 0.1% of its 13F portfolio invested in the stock. Some other members of the smart money that hold long positions comprise Clint Carlson’s Carlson Capital, Renaissance Technologies and John Overdeck and David Siegel’s Two Sigma Advisors.

Let’s now take a look at hedge fund activity in other stocks – not necessarily in the same industry as Retail Opportunity Investments Corp (NASDAQ:ROIC) but similarly valued. We will take a look at International Speedway Corporation (NASDAQ:ISCA), LexinFintech Holdings Ltd. (NASDAQ:LX), Builders FirstSource, Inc. (NASDAQ:BLDR), and ProAssurance Corporation (NYSE:PRA). All of these stocks’ market caps are similar to ROIC’s market cap.

As you can see these stocks had an average of 19.75 hedge funds with bullish positions and the average amount invested in these stocks was $213 million. That figure was $110 million in ROIC’s case. Builders FirstSource, Inc. (NASDAQ:BLDR) is the most popular stock in this table. On the other hand International Speedway Corporation (NASDAQ:ISCA) is the least popular one with only 14 bullish hedge fund positions. Compared to these stocks Retail Opportunity Investments Corp (NASDAQ:ROIC) is even less popular than ISCA. Hedge funds clearly dropped the ball on ROIC as the stock delivered strong returns, though hedge funds’ consensus picks still generated respectable returns. Our calculations showed that top 20 most popular stocks among hedge funds returned 24.4% in 2019 through September 30th and outperformed the S&P 500 ETF (SPY) by 4 percentage points. A small number of hedge funds were also right about betting on ROIC as the stock returned 7.6% during the third quarter and outperformed the market by an even larger margin.