Hedge Funds Have Never Been This Bullish On Reata Pharmaceuticals, Inc. (RETA)

The government requires hedge funds and wealthy investors that crossed the $100 million equity holdings threshold are required to file a report that shows their positions at the end of every quarter. Even though it isn’t the intention, these filings level the playing field for ordinary investors. The latest round of 13F filings disclosed the funds’ positions on March 31. We at Insider Monkey have made an extensive database of nearly 750 of those elite funds and famous investors’ filings. In this article, we analyze how these elite funds and prominent investors traded Reata Pharmaceuticals, Inc. (NASDAQ:RETA) based on those filings.

Reata Pharmaceuticals, Inc. (NASDAQ:RETA) has experienced an increase in activity from the world’s largest hedge funds recently. RETA was in 18 hedge funds’ portfolios at the end of the first quarter of 2019. There were 17 hedge funds in our database with RETA positions at the end of the previous quarter. Our calculations also showed that reta isn’t among the 30 most popular stocks among hedge funds.

Heading into the second quarter of 2019, a total of 18 of the hedge funds tracked by Insider Monkey held long positions in this stock, a change of 6% from the fourth quarter of 2018. By comparison, 10 hedge funds held shares or bullish call options in RETA a year ago. With hedge funds’ positions undergoing their usual ebb and flow, there exists an “upper tier” of noteworthy hedge fund managers who were adding to their holdings substantially (or already accumulated large positions). 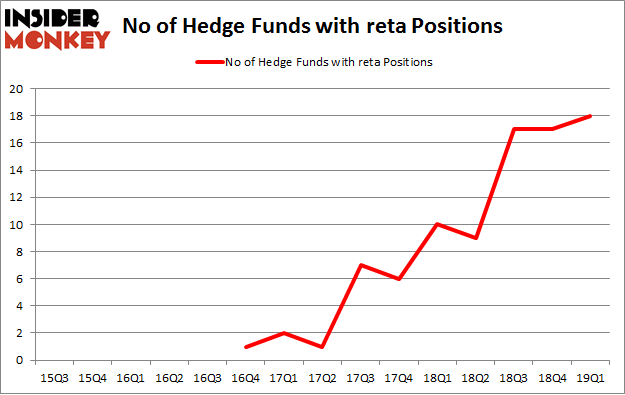 According to Insider Monkey’s hedge fund database, Thomas Steyer’s Farallon Capital has the largest position in Reata Pharmaceuticals, Inc. (NASDAQ:RETA), worth close to $64.1 million, accounting for 0.5% of its total 13F portfolio. The second largest stake is held by Bihua Chen of Cormorant Asset Management, with a $52.6 million position; 3.6% of its 13F portfolio is allocated to the company. Remaining hedge funds and institutional investors with similar optimism consist of Israel Englander’s Millennium Management, James E. Flynn’s Deerfield Management and Steve Cohen’s Point72 Asset Management.

With a general bullishness amongst the heavyweights, specific money managers have jumped into Reata Pharmaceuticals, Inc. (NASDAQ:RETA) headfirst. PEAK6 Capital Management, managed by Matthew Hulsizer, assembled the most valuable call position in Reata Pharmaceuticals, Inc. (NASDAQ:RETA). PEAK6 Capital Management had $0.5 million invested in the company at the end of the quarter. John Overdeck and David Siegel’s Two Sigma Advisors also made a $0.3 million investment in the stock during the quarter. The other funds with brand new RETA positions are Alec Litowitz and Ross Laser’s Magnetar Capital and David Harding’s Winton Capital Management.

As you can see these stocks had an average of 22 hedge funds with bullish positions and the average amount invested in these stocks was $231 million. That figure was $256 million in RETA’s case. Dana Incorporated (NYSE:DAN) is the most popular stock in this table. On the other hand Companhia Paranaense de Energia – COPEL (NYSE:ELP) is the least popular one with only 10 bullish hedge fund positions. Reata Pharmaceuticals, Inc. (NASDAQ:RETA) is not the least popular stock in this group but hedge fund interest is still below average. Our calculations showed that top 20 most popular stocks among hedge funds returned 1.9% in Q2 through May 30th and outperformed the S&P 500 ETF (SPY) by more than 3 percentage points. A small number of hedge funds were also right about betting on RETA as the stock returned 8.6% during the same time frame and outperformed the market by an even larger margin.