There are several ways to beat the market, and investing in small cap stocks has historically been one of them. We like to improve the odds of beating the market further by examining what famous hedge fund operators such as Jeff Ubben, George Soros and Carl Icahn think. Those hedge fund operators make billions of dollars each year by hiring the best and the brightest to do research on stocks, including small cap stocks that big brokerage houses simply don’t cover. Because of Carl Icahn and other elite funds’ exemplary historical records, we pay attention to their small cap picks. In this article, we use hedge fund filing data to analyze Realty Income Corporation (NYSE:O).

Realty Income Corporation (NYSE:O) investors should pay attention to an increase in support from the world’s most elite money managers lately. O was in 22 hedge funds’ portfolios at the end of the second quarter of 2019. There were 15 hedge funds in our database with O holdings at the end of the previous quarter. Our calculations also showed that O isn’t among the 30 most popular stocks among hedge funds (see the video below).

In the eyes of most stock holders, hedge funds are seen as unimportant, outdated financial vehicles of years past. While there are over 8000 funds with their doors open at the moment, We look at the leaders of this group, around 750 funds. These money managers watch over the majority of the smart money’s total asset base, and by monitoring their top equity investments, Insider Monkey has found a few investment strategies that have historically outstripped Mr. Market. Insider Monkey’s flagship hedge fund strategy outperformed the S&P 500 index by around 5 percentage points per year since its inception in May 2014. We were able to generate large returns even by identifying short candidates. Our portfolio of short stocks lost 25.7% since February 2017 (through September 30th) even though the market was up more than 33% during the same period. We just shared a list of 10 short targets in our latest quarterly update . 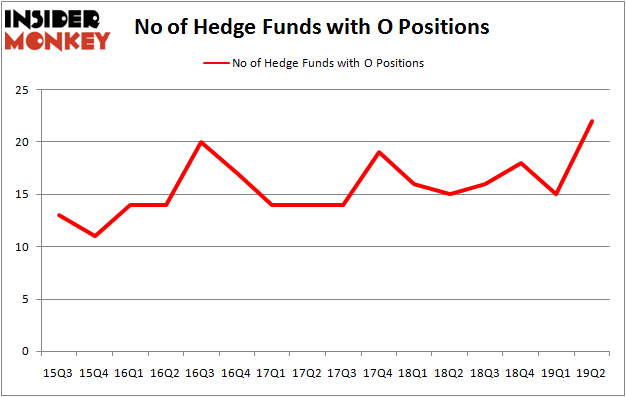 Unlike some fund managers who are betting on Dow reaching 40000 in a year, our long-short investment strategy doesn’t rely on bull markets to deliver double digit returns. We only rely on hedge fund buy/sell signals. We’re going to take a look at the fresh hedge fund action regarding Realty Income Corporation (NYSE:O).

At Q2’s end, a total of 22 of the hedge funds tracked by Insider Monkey held long positions in this stock, a change of 47% from one quarter earlier. By comparison, 15 hedge funds held shares or bullish call options in O a year ago. With hedgies’ positions undergoing their usual ebb and flow, there exists a select group of noteworthy hedge fund managers who were adding to their holdings significantly (or already accumulated large positions).

The largest stake in Realty Income Corporation (NYSE:O) was held by Zimmer Partners, which reported holding $69 million worth of stock at the end of March. It was followed by Adage Capital Management with a $26.5 million position. Other investors bullish on the company included Citadel Investment Group, Two Sigma Advisors, and AQR Capital Management.

As industrywide interest jumped, specific money managers have jumped into Realty Income Corporation (NYSE:O) headfirst. Two Sigma Advisors, managed by John Overdeck and David Siegel, created the most outsized position in Realty Income Corporation (NYSE:O). Two Sigma Advisors had $19.8 million invested in the company at the end of the quarter. Dmitry Balyasny’s Balyasny Asset Management also made a $12.7 million investment in the stock during the quarter. The other funds with new positions in the stock are Israel Englander’s Millennium Management, Paul Tudor Jones’s Tudor Investment Corp, and Jeffrey Talpins’s Element Capital Management.

As you can see these stocks had an average of 23 hedge funds with bullish positions and the average amount invested in these stocks was $1059 million. That figure was $235 million in O’s case. KKR & Co Inc. (NYSE:KKR) is the most popular stock in this table. On the other hand Telefonica Brasil SA (NYSE:VIV) is the least popular one with only 12 bullish hedge fund positions. Realty Income Corporation (NYSE:O) is not the least popular stock in this group but hedge fund interest is still below average. Our calculations showed that top 20 most popular stocks among hedge funds returned 24.4% in 2019 through September 30th and outperformed the S&P 500 ETF (SPY) by 4 percentage points. A small number of hedge funds were also right about betting on O as the stock returned 12.2% during the same time frame and outperformed the market by an even larger margin.