Hedge Funds Have Never Been This Bullish On Ra Pharmaceuticals, Inc. (RARX)

During the fourth quarter the Russell 2000 ETF (IWM) lagged the larger S&P 500 ETF (SPY) by nearly 7 percentage points as investors worried over the possible ramifications of rising interest rates. The hedge funds and institutional investors we track typically invest more in smaller-cap stocks than an average investor (i.e. only 298 S&P 500 constituents were among the 500 most popular stocks among hedge funds), and we have seen data that shows those funds paring back their overall exposure. Those funds cutting positions in small-caps is one reason why volatility has increased. In the following paragraphs, we take a closer look at what hedge funds and prominent investors think of Ra Pharmaceuticals, Inc. (NASDAQ:RARX) and see how the stock is affected by the recent hedge fund activity.

Is Ra Pharmaceuticals, Inc. (NASDAQ:RARX) a buy right now? The smart money is in a bullish mood. The number of bullish hedge fund bets inched up by 2 in recent months. Our calculations also showed that RARX isn’t among the 30 most popular stocks among hedge funds. 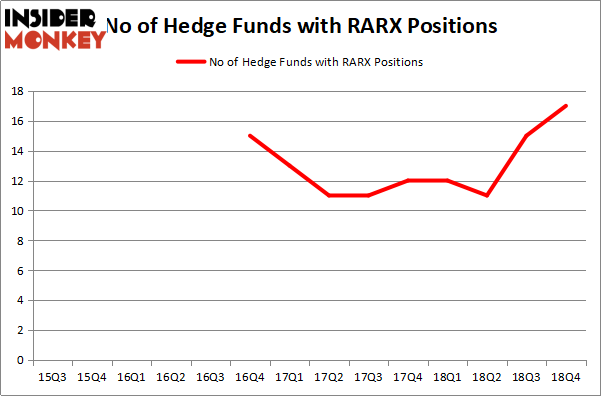 The largest stake in Ra Pharmaceuticals, Inc. (NASDAQ:RARX) was held by RA Capital Management, which reported holding $34 million worth of stock at the end of December. It was followed by Deerfield Management with a $27.3 million position. Other investors bullish on the company included Citadel Investment Group, Baker Bros. Advisors, and Sectoral Asset Management.

Now, some big names have been driving this bullishness. Cormorant Asset Management, managed by Bihua Chen, established the biggest position in Ra Pharmaceuticals, Inc. (NASDAQ:RARX). Cormorant Asset Management had $8 million invested in the company at the end of the quarter. Noam Gottesman’s GLG Partners also made a $3.8 million investment in the stock during the quarter. The other funds with new positions in the stock are Phill Gross and Robert Atchinson’s Adage Capital Management and Cliff Asness’s AQR Capital Management.

As you can see these stocks had an average of 12.25 hedge funds with bullish positions and the average amount invested in these stocks was $85 million. That figure was $159 million in RARX’s case. Rocket Pharmaceuticals, Inc. (NASDAQ:RCKT) is the most popular stock in this table. On the other hand Himax Technologies, Inc. (NASDAQ:HIMX) is the least popular one with only 9 bullish hedge fund positions. Compared to these stocks Ra Pharmaceuticals, Inc. (NASDAQ:RARX) is more popular among hedge funds. Our calculations showed that top 15 most popular stocks) among hedge funds returned 24.2% through April 22nd and outperformed the S&P 500 ETF (SPY) by more than 7 percentage points. Hedge funds were also right about betting on RARX, though not to the same extent, as the stock returned 16.8% and outperformed the market as well.