In these volatile markets we scrutinize hedge fund filings to get a reading on which direction each stock might be going. Insider Monkey has processed numerous 13F filings of hedge funds and successful value investors to create an extensive database of hedge fund holdings. The 13F filings show the hedge funds’ and successful investors’ positions as of the end of the fourth quarter. You can find articles about an individual hedge fund’s trades on numerous financial news websites. However, in this article we will take a look at their collective moves over the last 4 years and analyze what the smart money thinks of Power Integrations Inc (NASDAQ:POWI) based on that data.

If you’d ask most stock holders, hedge funds are viewed as slow, outdated investment tools of the past. While there are over 8000 funds trading at present, Our experts choose to focus on the moguls of this group, about 850 funds. Most estimates calculate that this group of people administer the lion’s share of all hedge funds’ total capital, and by monitoring their top picks, Insider Monkey has identified a number of investment strategies that have historically surpassed the S&P 500 index. Insider Monkey’s flagship short hedge fund strategy beat the S&P 500 short ETFs by around 20 percentage points per year since its inception in March 2017. Our portfolio of short stocks lost 35.3% since February 2017 (through March 3rd) even though the market was up more than 35% during the same period. We just shared a list of 7 short targets in our latest quarterly update .

We leave no stone unturned when looking for the next great investment idea. For example we recently identified a stock that trades 25% below the net cash on its balance sheet. We read hedge fund investor letters and listen to stock pitches at hedge fund conferences, and go through short-term trade recommendations like this one. We even check out the recommendations of services with hard to believe track records. Our best call in 2020 was shorting the market when S&P 500 was trading at 3150 after realizing the coronavirus pandemic’s significance before most investors. Now we’re going to view the latest hedge fund action surrounding Power Integrations Inc (NASDAQ:POWI).

What does smart money think about Power Integrations Inc (NASDAQ:POWI)? 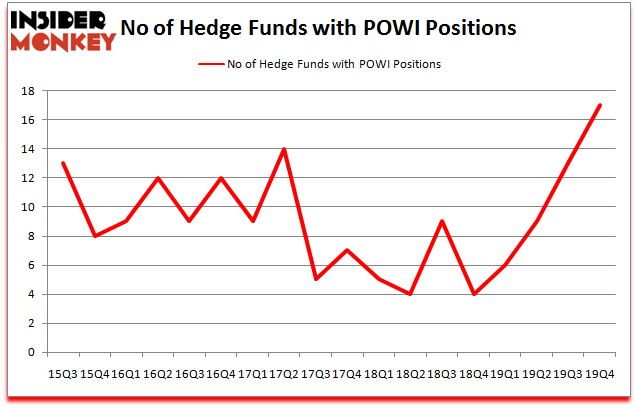 Among these funds, Polar Capital held the most valuable stake in Power Integrations Inc (NASDAQ:POWI), which was worth $20.4 million at the end of the third quarter. On the second spot was Citadel Investment Group which amassed $7.1 million worth of shares. GLG Partners, Driehaus Capital, and D E Shaw were also very fond of the stock, becoming one of the largest hedge fund holders of the company. In terms of the portfolio weights assigned to each position Quantinno Capital allocated the biggest weight to Power Integrations Inc (NASDAQ:POWI), around 0.23% of its 13F portfolio. Polar Capital is also relatively very bullish on the stock, setting aside 0.18 percent of its 13F equity portfolio to POWI.

With a general bullishness amongst the heavyweights, specific money managers were breaking ground themselves. Polar Capital, managed by Brian Ashford-Russell and Tim Woolley, created the most valuable position in Power Integrations Inc (NASDAQ:POWI). Polar Capital had $20.4 million invested in the company at the end of the quarter. Renaissance Technologies also made a $4.9 million investment in the stock during the quarter. The other funds with brand new POWI positions are David Harding’s Winton Capital Management, Paul Marshall and Ian Wace’s Marshall Wace LLP, and Mika Toikka’s AlphaCrest Capital Management.

As you can see these stocks had an average of 17.75 hedge funds with bullish positions and the average amount invested in these stocks was $171 million. That figure was $63 million in POWI’s case. Ryder System, Inc. (NYSE:R) is the most popular stock in this table. On the other hand AllianceBernstein Holding LP (NYSE:AB) is the least popular one with only 11 bullish hedge fund positions. Power Integrations Inc (NASDAQ:POWI) is not the least popular stock in this group but hedge fund interest is still below average. Our calculations showed that top 20 most popular stocks among hedge funds returned 41.3% in 2019 and outperformed the S&P 500 ETF (SPY) by 10.1 percentage points. These stocks lost 17.4% in 2020 through March 25th but still beat the market by 5.5 percentage points. A small number of hedge funds were also right about betting on POWI as the stock returned -11.1% during the same time period and outperformed the market by an even larger margin.