Russell 2000 ETF (IWM) lagged the larger S&P 500 ETF (SPY) by nearly 9 percentage points since the end of the third quarter of 2018 as investors worried over the possible ramifications of rising interest rates and escalation of the trade war with China. The hedge funds and institutional investors we track typically invest more in smaller-cap stocks than an average investor (i.e. only 298 S&P 500 constituents were among the 500 most popular stocks among hedge funds), and we have seen data that shows those funds paring back their overall exposure. Those funds cutting positions in small-caps is one reason why volatility has increased. In the following paragraphs, we take a closer look at what hedge funds and prominent investors think of Paycom Software Inc (NYSE:PAYC) and see how the stock is affected by the recent hedge fund activity.

Is Paycom Software Inc (NYSE:PAYC) a healthy stock for your portfolio? Money managers are taking an optimistic view. The number of long hedge fund positions inched up by 6 in recent months. Our calculations also showed that payc isn’t among the 30 most popular stocks among hedge funds.

How have hedgies been trading Paycom Software Inc (NYSE:PAYC)? 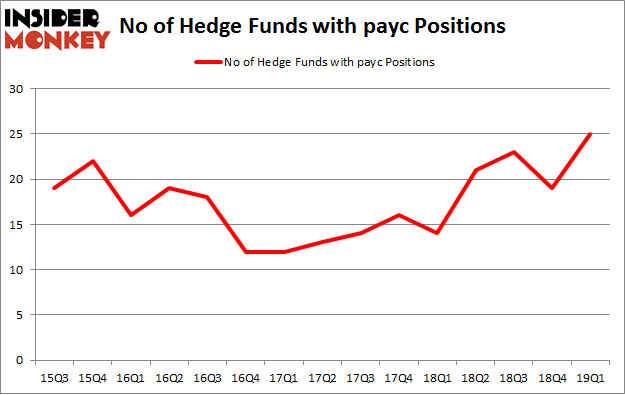 The largest stake in Paycom Software Inc (NYSE:PAYC) was held by Arrowstreet Capital, which reported holding $85.5 million worth of stock at the end of March. It was followed by AQR Capital Management with a $33.5 million position. Other investors bullish on the company included Fisher Asset Management, Carlson Capital, and D E Shaw.

As you can see these stocks had an average of 27.5 hedge funds with bullish positions and the average amount invested in these stocks was $907 million. That figure was $318 million in PAYC’s case. Ally Financial Inc (NYSE:ALLY) is the most popular stock in this table. On the other hand Duke Realty Corporation (NYSE:DRE) is the least popular one with only 16 bullish hedge fund positions. Paycom Software Inc (NYSE:PAYC) is not the least popular stock in this group but hedge fund interest is still below average. Our calculations showed that top 20 most popular stocks among hedge funds returned 1.9% in Q2 through May 30th and outperformed the S&P 500 ETF (SPY) by more than 3 percentage points. A small number of hedge funds were also right about betting on PAYC as the stock returned 10.6% during the same time frame and outperformed the market by an even larger margin.