Hedge Funds Have Never Been This Bullish On Pacific Biosciences of California, Inc. (PACB)

Most investors tend to think that hedge funds and other asset managers are worthless, as they cannot beat even simple index fund portfolios. In fact, most people expect hedge funds to compete with and outperform the bull market that we have witnessed in recent years. However, hedge funds are generally partially hedged and aim at delivering attractive risk-adjusted returns rather than following the ups and downs of equity markets hoping that they will outperform the broader market. Our research shows that certain hedge funds do have great stock picking skills (and we can identify these hedge funds in advance pretty accurately), so let’s take a glance at the smart money sentiment towards Pacific Biosciences of California, Inc. (NASDAQ:PACB).

Pacific Biosciences of California, Inc. (NASDAQ:PACB) has experienced an increase in enthusiasm from smart money lately. PACB was in 23 hedge funds’ portfolios at the end of September. There were 22 hedge funds in our database with PACB positions at the end of the previous quarter. Our calculations also showed that PACB isn’t among the 30 most popular stocks among hedge funds (click for Q3 rankings and see the video below for Q2 rankings).

Unlike the largest US hedge funds that are convinced Dow will soar past 40,000 or the world’s most bearish hedge fund that’s more convinced than ever that a crash is coming, our long-short investment strategy doesn’t rely on bull or bear markets to deliver double digit returns. We only rely on the best performing hedge funds‘ buy/sell signals. We’re going to check out the key hedge fund action encompassing Pacific Biosciences of California, Inc. (NASDAQ:PACB).

What does smart money think about Pacific Biosciences of California, Inc. (NASDAQ:PACB)? 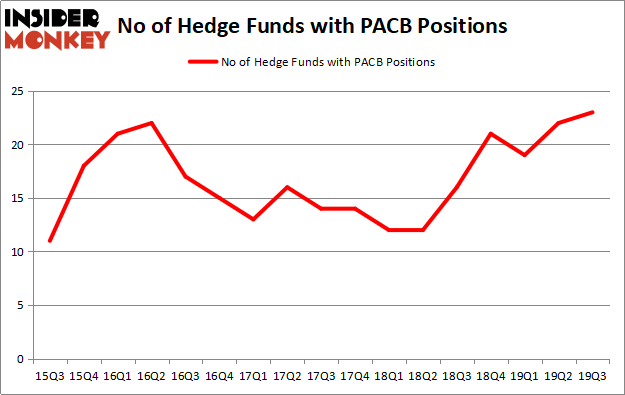 The largest stake in Pacific Biosciences of California, Inc. (NASDAQ:PACB) was held by Magnetar Capital, which reported holding $36.5 million worth of stock at the end of September. It was followed by Alpine Associates with a $28.4 million position. Other investors bullish on the company included Water Island Capital, Millennium Management, and GLG Partners. In terms of the portfolio weights assigned to each position Havens Advisors allocated the biggest weight to Pacific Biosciences of California, Inc. (NASDAQ:PACB), around 2.72% of its 13F portfolio. Water Island Capital is also relatively very bullish on the stock, earmarking 1.47 percent of its 13F equity portfolio to PACB.

Now, key money managers were breaking ground themselves. Alyeska Investment Group, managed by Anand Parekh, assembled the most valuable position in Pacific Biosciences of California, Inc. (NASDAQ:PACB). Alyeska Investment Group had $6.6 million invested in the company at the end of the quarter. Andrew Hahn’s Ursa Fund Management also initiated a $1 million position during the quarter. The other funds with new positions in the stock are Michael Platt and William Reeves’s BlueCrest Capital Mgmt. and Michael Gelband’s ExodusPoint Capital.

As you can see these stocks had an average of 11.75 hedge funds with bullish positions and the average amount invested in these stocks was $68 million. That figure was $132 million in PACB’s case. Celestica Inc. (NYSE:CLS) is the most popular stock in this table. On the other hand INTL Fcstone Inc (NASDAQ:INTL) is the least popular one with only 10 bullish hedge fund positions. Compared to these stocks Pacific Biosciences of California, Inc. (NASDAQ:PACB) is more popular among hedge funds. Our calculations showed that top 20 most popular stocks among hedge funds returned 37.4% in 2019 through the end of November and outperformed the S&P 500 ETF (SPY) by 9.9 percentage points. Unfortunately PACB wasn’t nearly as popular as these 20 stocks and hedge funds that were betting on PACB were disappointed as the stock returned -0.4% during the first two months of the fourth quarter and underperformed the market. If you are interested in investing in large cap stocks with huge upside potential, you should check out the top 20 most popular stocks among hedge funds as 70 percent of these stocks already outperformed the market in Q4.