Hedge Funds Have Never Been This Bullish On Organigram Holdings Inc. (OGI)

Many investors, including Paul Tudor Jones or Stan Druckenmiller, have been saying before the Q4 market crash that the stock market is overvalued due to a low interest rate environment that leads to companies swapping their equity for debt and focusing mostly on short-term performance such as beating the quarterly earnings estimates. In the first half of 2019, most investors recovered all of their Q4 losses as sentiment shifted and optimism dominated the US China trade negotiations. Nevertheless, many of the stocks that delivered strong returns in the first half still sport strong fundamentals and their gains were more related to the general market sentiment rather than their individual performance and hedge funds kept their bullish stance. In this article we will find out how hedge fund sentiment to Organigram Holdings Inc. (NASDAQ:OGI) changed recently.

Organigram Holdings Inc. (NASDAQ:OGI) investors should pay attention to an increase in hedge fund sentiment of late. Our calculations also showed that OGI isn’t among the 30 most popular stocks among hedge funds (see the video below).

To most investors, hedge funds are seen as unimportant, old financial tools of yesteryear. While there are over 8000 funds with their doors open today, Our experts hone in on the elite of this club, around 750 funds. These money managers handle most of all hedge funds’ total capital, and by tracking their best equity investments, Insider Monkey has deciphered a number of investment strategies that have historically exceeded Mr. Market. Insider Monkey’s flagship hedge fund strategy surpassed the S&P 500 index by around 5 percentage points per annum since its inception in May 2014. We were able to generate large returns even by identifying short candidates. Our portfolio of short stocks lost 25.7% since February 2017 (through September 30th) even though the market was up more than 33% during the same period. We just shared a list of 10 short targets in our latest quarterly update . 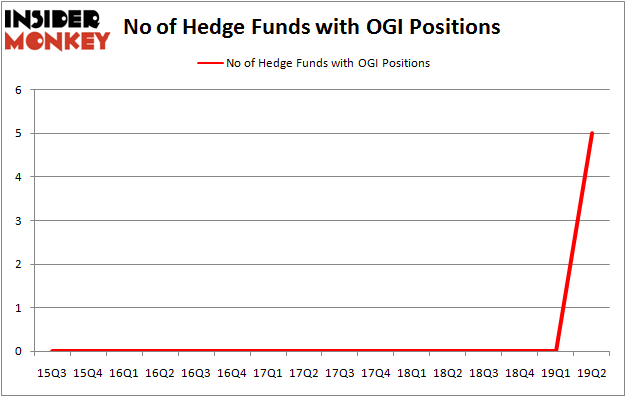 What have hedge funds been doing with Organigram Holdings Inc. (NASDAQ:OGI)?

Among these funds, Ardsley Partners held the most valuable stake in Organigram Holdings Inc. (NASDAQ:OGI), which was worth $6.4 million at the end of the second quarter. On the second spot was Ancora Advisors which amassed $2.3 million worth of shares. Moreover, Springbok Capital, Diametric Capital, and Rima Senvest Management were also bullish on Organigram Holdings Inc. (NASDAQ:OGI), allocating a large percentage of their portfolios to this stock.

Consequently, key hedge funds were breaking ground themselves. Ardsley Partners, managed by Philip Hempleman, created the largest position in Organigram Holdings Inc. (NASDAQ:OGI). Ardsley Partners had $6.4 million invested in the company at the end of the quarter. Frederick DiSanto’s Ancora Advisors also made a $2.3 million investment in the stock during the quarter. The other funds with brand new OGI positions are Gavin Saitowitz and Cisco J. del Valle’s Springbok Capital, Nick Thakore’s Diametric Capital, and Richard Mashaal’s Rima Senvest Management.

As you can see these stocks had an average of 15.75 hedge funds with bullish positions and the average amount invested in these stocks was $102 million. That figure was $9 million in OGI’s case. Boot Barn Holdings Inc (NYSE:BOOT) is the most popular stock in this table. On the other hand ePlus Inc. (NASDAQ:PLUS) is the least popular one with only 12 bullish hedge fund positions. Compared to these stocks Organigram Holdings Inc. (NASDAQ:OGI) is even less popular than PLUS. Hedge funds dodged a bullet by taking a bearish stance towards OGI. Our calculations showed that the top 20 most popular hedge fund stocks returned 24.4% in 2019 through September 30th and outperformed the S&P 500 ETF (SPY) by 4 percentage points. Unfortunately OGI wasn’t nearly as popular as these 20 stocks (hedge fund sentiment was very bearish); OGI investors were disappointed as the stock returned -46.6% during the third quarter and underperformed the market. If you are interested in investing in large cap stocks with huge upside potential, you should check out the top 20 most popular stocks among hedge funds as many of these stocks already outperformed the market so far in 2019.

Hedge Funds Have Never Been More Bullish On Pretium Resources Inc (PVG)
Monthly Newsletter Strategy
Download a free copy of our newsletter and see the details inside!
Hedge Fund Resource Center
Related News
25 Biggest Marijuana Companies in the World 11 Largest Auto Insurance Companies In The US In 2019 10 Poorest Cities in America in 2019 8 Lowest Tar and Nicotine Cigarette Brands in 2019
Billionaire Hedge Funds