ON Semiconductor Corporation (NASDAQ:ON) shareholders have witnessed an increase in enthusiasm from smart money in recent months. Our calculations also showed that ON isn’t among the 30 most popular stocks among hedge funds.

If you’d ask most shareholders, hedge funds are perceived as underperforming, outdated investment vehicles of yesteryear. While there are over 8000 funds trading at present, Our researchers choose to focus on the crème de la crème of this club, around 750 funds. These money managers administer bulk of all hedge funds’ total capital, and by watching their matchless equity investments, Insider Monkey has brought to light a few investment strategies that have historically defeated the S&P 500 index. Insider Monkey’s flagship hedge fund strategy exceeded the S&P 500 index by around 5 percentage points per annum since its inception in May 2014 through the end of May. We were able to generate large returns even by identifying short candidates. Our portfolio of short stocks lost 30.9% since February 2017 (through May 30th) even though the market was up nearly 24% during the same period. We just shared a list of 5 short targets in our latest quarterly update and they are already down an average of 11.9% in less than a couple of weeks whereas our long picks outperformed the market by 2 percentage points in this volatile 2 week period.

Let’s take a look at the fresh hedge fund action regarding ON Semiconductor Corporation (NASDAQ:ON). 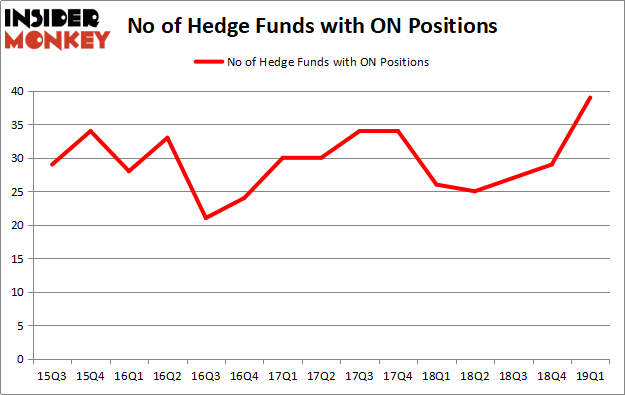 The largest stake in ON Semiconductor Corporation (NASDAQ:ON) was held by Blue Harbour Group, which reported holding $81.9 million worth of stock at the end of March. It was followed by Arrowstreet Capital with a $73.8 million position. Other investors bullish on the company included Millennium Management, Citadel Investment Group, and AQR Capital Management.

As one would reasonably expect, some big names have jumped into ON Semiconductor Corporation (NASDAQ:ON) headfirst. Point72 Asset Management, managed by Steve Cohen, assembled the most outsized position in ON Semiconductor Corporation (NASDAQ:ON). Point72 Asset Management had $41.1 million invested in the company at the end of the quarter. Richard Mashaal’s Rima Senvest Management also initiated a $21 million position during the quarter. The following funds were also among the new ON investors: Brian Ashford-Russell and Tim Woolley’s Polar Capital, William Harnisch’s Peconic Partners LLC, and Principal Global Investors’s Columbus Circle Investors.

As you can see these stocks had an average of 20 hedge funds with bullish positions and the average amount invested in these stocks was $711 million. That figure was $661 million in ON’s case. Nielsen Holdings plc (NYSE:NLSN) is the most popular stock in this table. On the other hand LINE Corporation (NYSE:LN) is the least popular one with only 5 bullish hedge fund positions. Compared to these stocks ON Semiconductor Corporation (NASDAQ:ON) is more popular among hedge funds. Our calculations showed that top 20 most popular stocks among hedge funds returned 1.9% in Q2 through May 30th and outperformed the S&P 500 ETF (SPY) by more than 3 percentage points. Unfortunately ON wasn’t nearly as popular as these 20 stocks and hedge funds that were betting on ON were disappointed as the stock returned -12% during the same period and underperformed the market. If you are interested in investing in large cap stocks with huge upside potential, you should check out the top 20 most popular stocks among hedge funds as 13 of these stocks already outperformed the market in Q2.