The 700+ hedge funds and famous money managers tracked by Insider Monkey have already compiled and submitted their 13F filings for the second quarter, which unveil their equity positions as of June 28. We went through these filings, fixed typos and other more significant errors and identified the changes in hedge fund portfolios. Our extensive review of these public filings is finally over, so this article is set to reveal the smart money sentiment towards Omega Healthcare Investors Inc (NYSE:OHI).

Omega Healthcare Investors Inc (NYSE:OHI) was in 17 hedge funds’ portfolios at the end of June. OHI has seen an increase in hedge fund interest of late. There were 13 hedge funds in our database with OHI holdings at the end of the previous quarter. Our calculations also showed that OHI isn’t among the 30 most popular stocks among hedge funds (view the video below).

Unlike some fund managers who are betting on Dow reaching 40000 in a year, our long-short investment strategy doesn’t rely on bull markets to deliver double digit returns. We only rely on hedge fund buy/sell signals. We’re going to go over the key hedge fund action encompassing Omega Healthcare Investors Inc (NYSE:OHI).

At the end of the second quarter, a total of 17 of the hedge funds tracked by Insider Monkey held long positions in this stock, a change of 31% from the previous quarter. Below, you can check out the change in hedge fund sentiment towards OHI over the last 16 quarters. So, let’s review which hedge funds were among the top holders of the stock and which hedge funds were making big moves. 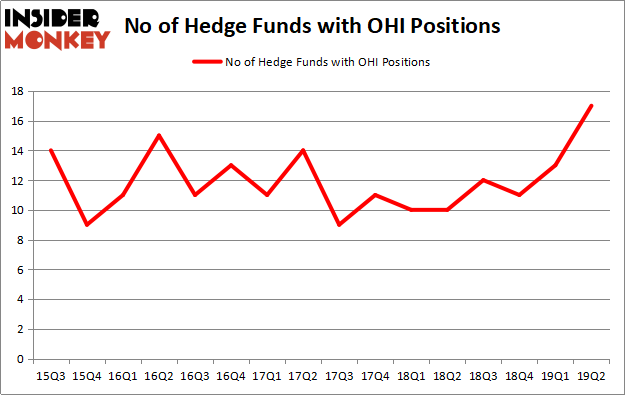 Of the funds tracked by Insider Monkey, Zimmer Partners, managed by Stuart J. Zimmer, holds the most valuable position in Omega Healthcare Investors Inc (NYSE:OHI). Zimmer Partners has a $101 million position in the stock, comprising 1.1% of its 13F portfolio. The second largest stake is held by Renaissance Technologies, with a $65.7 million position; 0.1% of its 13F portfolio is allocated to the stock. Remaining peers with similar optimism contain John Khoury’s Long Pond Capital, John Overdeck and David Siegel’s Two Sigma Advisors and Ken Griffin’s Citadel Investment Group.

Consequently, some big names were breaking ground themselves. Long Pond Capital, managed by John Khoury, established the most outsized position in Omega Healthcare Investors Inc (NYSE:OHI). Long Pond Capital had $48.2 million invested in the company at the end of the quarter. Matthew Tewksbury’s Stevens Capital Management also made a $3.2 million investment in the stock during the quarter. The other funds with brand new OHI positions are Kamran Moghtaderi’s Eversept Partners, Joel Greenblatt’s Gotham Asset Management, and Alec Litowitz and Ross Laser’s Magnetar Capital.

Let’s go over hedge fund activity in other stocks – not necessarily in the same industry as Omega Healthcare Investors Inc (NYSE:OHI) but similarly valued. We will take a look at Brookfield Property Partners LP (NASDAQ:BPY), Carlyle Group LP (NASDAQ:CG), Xerox Corporation (NYSE:XRX), and Tata Motors Limited (NYSE:TTM). All of these stocks’ market caps are similar to OHI’s market cap.

As you can see these stocks had an average of 13 hedge funds with bullish positions and the average amount invested in these stocks was $433 million. That figure was $284 million in OHI’s case. Xerox Corporation (NYSE:XRX) is the most popular stock in this table. On the other hand Brookfield Property Partners LP (NASDAQ:BPY) is the least popular one with only 6 bullish hedge fund positions. Omega Healthcare Investors Inc (NYSE:OHI) is not the most popular stock in this group but hedge fund interest is still above average. Our calculations showed that top 20 most popular stocks among hedge funds returned 24.4% in 2019 through September 30th and outperformed the S&P 500 ETF (SPY) by 4 percentage points. Hedge funds were also right about betting on OHI as the stock returned 15.8% during the third quarter and outperformed the market. Hedge funds were rewarded for their relative bullishness.