Before we spend days researching a stock idea we like to take a look at how hedge funds and billionaire investors recently traded that stock. Russell 2000 ETF (IWM) lagged the larger S&P 500 ETF (SPY) by more than 10 percentage points since the end of the third quarter of 2018. This means hedge funds that are allocating a higher percentage of their portfolio to small-cap stocks were probably underperforming the market. However, this also means that as small-cap stocks start to mean revert, these hedge funds will start delivering better returns than the S&P 500 Index funds. In this article, we will take a look at what hedge funds think about NextCure, Inc. (NASDAQ:NXTC).

NextCure, Inc. (NASDAQ:NXTC) shareholders have witnessed an increase in activity from the world’s largest hedge funds lately. NXTC was in 8 hedge funds’ portfolios at the end of the second quarter of 2019. There were 0 hedge funds in our database with NXTC positions at the end of the previous quarter. Our calculations also showed that NXTC isn’t among the 30 most popular stocks among hedge funds (see the video below).

Unlike other investors who track every movement of the 25 largest hedge funds, our long-short investment strategy relies on hedge fund buy/sell signals given by the 100 best performing hedge funds. Let’s take a look at the key hedge fund action surrounding NextCure, Inc. (NASDAQ:NXTC). 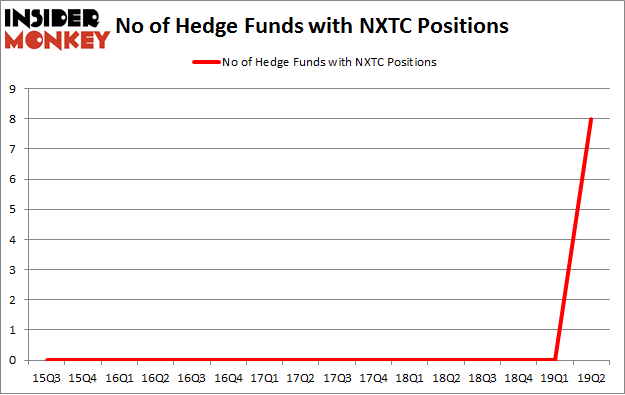 More specifically, OrbiMed Advisors was the largest shareholder of NextCure, Inc. (NASDAQ:NXTC), with a stake worth $40.6 million reported as of the end of March. Trailing OrbiMed Advisors was Citadel Investment Group, which amassed a stake valued at $16.4 million. Cormorant Asset Management, Hillhouse Capital Management, and Baker Bros. Advisors were also very fond of the stock, giving the stock large weights in their portfolios.

As industrywide interest jumped, key money managers were leading the bulls’ herd. OrbiMed Advisors, managed by Samuel Isaly, assembled the most outsized position in NextCure, Inc. (NASDAQ:NXTC). OrbiMed Advisors had $40.6 million invested in the company at the end of the quarter. Ken Griffin’s Citadel Investment Group also made a $16.4 million investment in the stock during the quarter. The following funds were also among the new NXTC investors: Bihua Chen’s Cormorant Asset Management, Lei Zhang’s Hillhouse Capital Management, and Julian Baker and Felix Baker’s Baker Bros. Advisors.

Let’s check out hedge fund activity in other stocks – not necessarily in the same industry as NextCure, Inc. (NASDAQ:NXTC) but similarly valued. We will take a look at RBB Bancorp (NASDAQ:RBB), Majesco (NASDAQ:MJCO), Westport Fuel Systems Inc. (NASDAQ:WPRT), and Secoo Holding Limited (NASDAQ:SECO). This group of stocks’ market caps are closest to NXTC’s market cap.

As you can see these stocks had an average of 7 hedge funds with bullish positions and the average amount invested in these stocks was $17 million. That figure was $92 million in NXTC’s case. Westport Fuel Systems Inc. (NASDAQ:WPRT) is the most popular stock in this table. On the other hand Majesco (NASDAQ:MJCO) is the least popular one with only 3 bullish hedge fund positions. NextCure, Inc. (NASDAQ:NXTC) is not the most popular stock in this group but hedge fund interest is still above average. Our calculations showed that top 20 most popular stocks among hedge funds returned 24.4% in 2019 through September 30th and outperformed the S&P 500 ETF (SPY) by 4 percentage points. Hedge funds were also right about betting on NXTC as the stock returned 105.9% during the third quarter and outperformed the market. Hedge funds were rewarded for their relative bullishness.

Kaleido BioSciences, Inc. (KLDO) Is Burning These Hedge Funds
Monthly Newsletter Strategy
Download a free copy of our newsletter and see the details inside!
Hedge Fund Resource Center
Related News
11 Largest Auto Insurance Companies In The US In 2019 10 Poorest Cities in America in 2019 8 Lowest Tar and Nicotine Cigarette Brands in 2019
Billionaire Hedge Funds