Hedge Funds Have Never Been This Bullish On Netflix, Inc. (NFLX)

The latest 13F reporting period has come and gone, and Insider Monkey is again at the forefront when it comes to making use of this gold mine of data. We have processed the filings of the more than 700 world-class investment firms that we track and now have access to the collective wisdom contained in these filings, which are based on their June 28 holdings, data that is available nowhere else. Should you consider Netflix, Inc. (NASDAQ:NFLX) for your portfolio? We’ll look to this invaluable collective wisdom for the answer.

Netflix, Inc. (NASDAQ:NFLX) shareholders have witnessed an increase in activity from the world’s largest hedge funds lately. Overall hedge fund sentiment towards Netflix reached an all time high during the second quarter and NFLX currently ranks 9th among the 30 most popular stocks among hedge funds.

Unlike some fund managers who are betting on Dow reaching 40000 in a year, our long-short investment strategy doesn’t rely on bull markets to deliver double digit returns. We only rely on hedge fund buy/sell signals. We’re going to view the latest hedge fund action regarding Netflix, Inc. (NASDAQ:NFLX).

At the end of the second quarter, a total of 106 of the hedge funds tracked by Insider Monkey held long positions in this stock, a change of 10% from the first quarter of 2019. The graph below displays the number of hedge funds with bullish position in NFLX over the last 16 quarters. So, let’s examine which hedge funds were among the top holders of the stock and which hedge funds were making big moves. 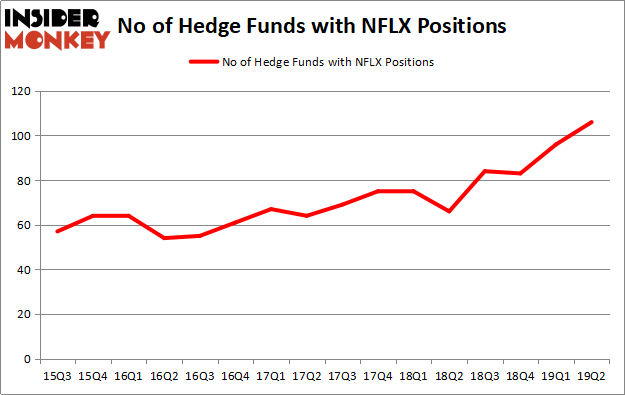 The largest stake in Netflix, Inc. (NASDAQ:NFLX) was held by SRS Investment Management, which reported holding $1298.1 million worth of stock at the end of March. It was followed by Citadel Investment Group with a $1228.4 million position. Other investors bullish on the company included D1 Capital Partners, Tiger Global Management LLC, and Viking Global.

As one would reasonably expect, some big names have been driving this bullishness. Fisher Asset Management, managed by Ken Fisher, assembled the largest position in Netflix, Inc. (NASDAQ:NFLX). Fisher Asset Management had $335.6 million invested in the company at the end of the quarter. OZ Management also made a $228.7 million investment in the stock during the quarter. The other funds with brand new NFLX positions are Jim Simons’s Renaissance Technologies, Anand Desai’s Darsana Capital Partners, and Keith Meister’s Corvex Capital.

As you can see these stocks had an average of 49.5 hedge funds with bullish positions and the average amount invested in these stocks was $4105 million. That figure was $11090 million in NFLX’s case. Citigroup Inc. (NYSE:C) is the most popular stock in this table. On the other hand Unilever N.V. (NYSE:UN) is the least popular one with only 16 bullish hedge fund positions. Compared to these stocks Netflix, Inc. (NASDAQ:NFLX) is more popular among hedge funds. Our calculations showed that top 20 most popular stocks among hedge funds returned 24.4% in 2019 through September 30th and outperformed the S&P 500 ETF (SPY) by 4 percentage points. Unfortunately NFLX wasn’t nearly as successful as these 20 stocks and hedge funds that were betting on NFLX were disappointed as the stock lost 27.1% during the third quarter and underperformed the market. Clearly hedge funds see the weakness in Netflix shares as a long term buying opportunity. If you are interested in investing in large cap stocks with huge upside potential, you should check out the top 20 most popular stocks among hedge funds as many of these stocks already outperformed the market in Q3.