Hedge Funds Have Never Been This Bullish On NeoGenomics, Inc. (NEO)

NeoGenomics, Inc. (NASDAQ:NEO) was in 24 hedge funds’ portfolios at the end of December. NEO has experienced an increase in activity from the world’s largest hedge funds of late. There were 17 hedge funds in our database with NEO holdings at the end of the previous quarter. Our calculations also showed that neo isn’t among the 30 most popular stocks among hedge funds.

If you’d ask most investors, hedge funds are seen as underperforming, old investment tools of years past. While there are more than 8000 funds in operation today, Our researchers look at the bigwigs of this club, approximately 750 funds. These hedge fund managers administer the majority of all hedge funds’ total asset base, and by watching their matchless equity investments, Insider Monkey has deciphered a few investment strategies that have historically outstripped Mr. Market. Insider Monkey’s flagship hedge fund strategy exceeded the S&P 500 index by nearly 5 percentage points per year since its inception in May 2014 through early November 2018. We were able to generate large returns even by identifying short candidates. Our portfolio of short stocks lost 27.5% since February 2017 (through March 12th) even though the market was up nearly 25% during the same period. We just shared a list of 6 short targets in our latest quarterly update and they are already down an average of 6% in less than a month.

What have hedge funds been doing with NeoGenomics, Inc. (NASDAQ:NEO)?

Heading into the first quarter of 2019, a total of 24 of the hedge funds tracked by Insider Monkey were long this stock, a change of 41% from one quarter earlier. By comparison, 10 hedge funds held shares or bullish call options in NEO a year ago. With hedgies’ capital changing hands, there exists a select group of notable hedge fund managers who were upping their holdings significantly (or already accumulated large positions). 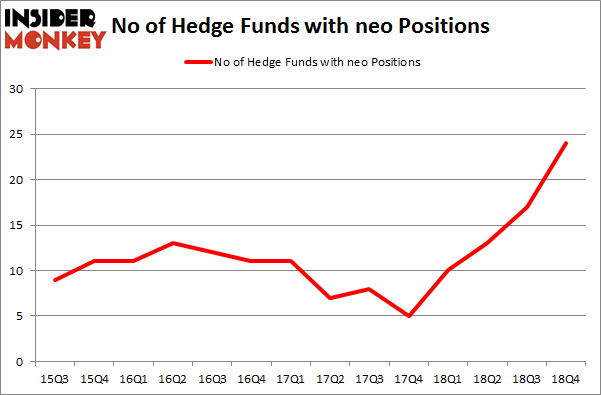 Of the funds tracked by Insider Monkey, Element Capital Management, managed by Jeffrey Talpins, holds the biggest position in NeoGenomics, Inc. (NASDAQ:NEO). Element Capital Management has a $28.2 million position in the stock, comprising 0.8% of its 13F portfolio. The second most bullish fund manager is Benjamin A. Smith of Laurion Capital Management, with a $15.9 million position; 0.3% of its 13F portfolio is allocated to the stock. Remaining hedge funds and institutional investors with similar optimism comprise Paul Marshall and Ian Wace’s Marshall Wace LLP, Israel Englander’s Millennium Management and Richard Driehaus’s Driehaus Capital.

Consequently, key money managers have been driving this bullishness. Element Capital Management, managed by Jeffrey Talpins, established the most valuable position in NeoGenomics, Inc. (NASDAQ:NEO). Element Capital Management had $28.2 million invested in the company at the end of the quarter. Benjamin A. Smith’s Laurion Capital Management also initiated a $15.9 million position during the quarter. The other funds with new positions in the stock are Paul Marshall and Ian Wace’s Marshall Wace LLP, Richard Driehaus’s Driehaus Capital, and Simon Sadler’s Segantii Capital.

As you can see these stocks had an average of 17.75 hedge funds with bullish positions and the average amount invested in these stocks was $128 million. That figure was $116 million in NEO’s case. McDermott International, Inc. (NYSE:MDR) is the most popular stock in this table. On the other hand TPG Specialty Lending Inc (NYSE:TSLX) is the least popular one with only 10 bullish hedge fund positions. Compared to these stocks NeoGenomics, Inc. (NASDAQ:NEO) is more popular among hedge funds. Our calculations showed that top 15 most popular stocks) among hedge funds returned 24.2% through April 22nd and outperformed the S&P 500 ETF (SPY) by more than 7 percentage points. Hedge funds were also right about betting on NEO as the stock returned 58.4% and outperformed the market by an even larger margin. Hedge funds were clearly right about piling into this stock relative to other stocks with similar market capitalizations.