Hedge Funds Have Never Been This Bullish On Moderna, Inc. (MRNA)

Most investors tend to think that hedge funds and other asset managers are worthless, as they cannot beat even simple index fund portfolios. In fact, most people expect hedge funds to compete with and outperform the bull market that we have witnessed in recent years. However, hedge funds are generally partially hedged and aim at delivering attractive risk-adjusted returns rather than following the ups and downs of equity markets hoping that they will outperform the broader market. Our research shows that certain hedge funds do have great stock picking skills (and we can identify these hedge funds in advance pretty accurately), so let’s take a glance at the smart money sentiment towards Moderna, Inc. (NASDAQ:MRNA).

Moderna, Inc. (NASDAQ:MRNA) has experienced an increase in hedge fund sentiment in recent months. Our calculations also showed that MRNA isn’t among the 30 most popular stocks among hedge funds (view the video below).

Unlike former hedge manager, Dr. Steve Sjuggerud, who is convinced Dow will soar past 40000, our long-short investment strategy doesn’t rely on bull markets to deliver double digit returns. We only rely on hedge fund buy/sell signals. Let’s take a look at the recent hedge fund action regarding Moderna, Inc. (NASDAQ:MRNA).

How have hedgies been trading Moderna, Inc. (NASDAQ:MRNA)? 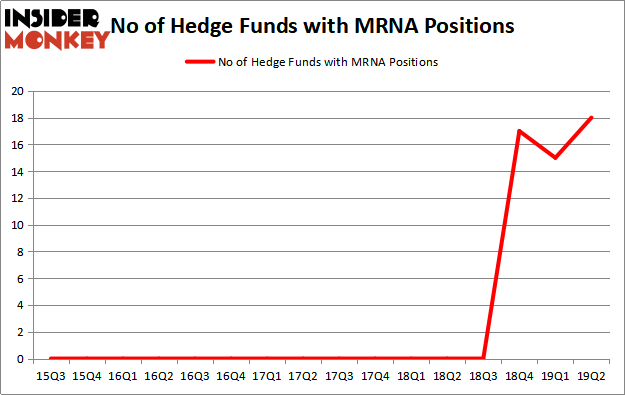 Among these funds, Viking Global held the most valuable stake in Moderna, Inc. (NASDAQ:MRNA), which was worth $120 million at the end of the second quarter. On the second spot was Theleme Partners which amassed $56.4 million worth of shares. Moreover, Platinum Asset Management, Hillhouse Capital Management, and Citadel Investment Group were also bullish on Moderna, Inc. (NASDAQ:MRNA), allocating a large percentage of their portfolios to this stock.

With a general bullishness amongst the heavyweights, some big names have jumped into Moderna, Inc. (NASDAQ:MRNA) headfirst. Luminus Management, managed by Jonathan Barrett and Paul Segal, created the most valuable position in Moderna, Inc. (NASDAQ:MRNA). Luminus Management had $10.2 million invested in the company at the end of the quarter. Renaissance Technologies also made a $4.1 million investment in the stock during the quarter. The other funds with brand new MRNA positions are Paul Marshall and Ian Wace’s Marshall Wace LLP, Matthew Tewksbury’s Stevens Capital Management, and Dmitry Balyasny’s Balyasny Asset Management.

As you can see these stocks had an average of 23.5 hedge funds with bullish positions and the average amount invested in these stocks was $396 million. That figure was $251 million in MRNA’s case. Essent Group Ltd (NYSE:ESNT) is the most popular stock in this table. On the other hand First Industrial Realty Trust, Inc. (NYSE:FR) is the least popular one with only 18 bullish hedge fund positions. Compared to these stocks Moderna, Inc. (NASDAQ:MRNA) is even less popular than FR. Hedge funds clearly dropped the ball on MRNA as the stock delivered strong returns, though hedge funds’ consensus picks still generated respectable returns. Our calculations showed that top 20 most popular stocks among hedge funds returned 24.4% in 2019 through September 30th and outperformed the S&P 500 ETF (SPY) by 4 percentage points. A small number of hedge funds were also right about betting on MRNA as the stock returned 8.7% during the third quarter and outperformed the market by an even larger margin.

Here is What Hedge Funds Think About Alcoa Corporation (AA)
Monthly Newsletter Strategy
Download a free copy of our newsletter and see the details inside!
Hedge Fund Resource Center
Related News
Is Moderna, Inc. (MRNA) A Good Stock To Buy? 11 Largest Auto Insurance Companies In The US In 2019 10 Poorest Cities in America in 2019 8 Lowest Tar and Nicotine Cigarette Brands in 2019
Billionaire Hedge Funds