Hedge Funds Have Never Been This Bullish On Mirati Therapeutics, Inc. (MRTX)

Does Mirati Therapeutics, Inc. (NASDAQ:MRTX) represent a good buying opportunity at the moment? Let’s quickly check the hedge fund interest towards the company. Hedge fund firms constantly search out bright intellectuals and highly-experienced employees and throw away millions of dollars on satellite photos and other research activities, so it is no wonder why they tend to generate millions in profits each year. It is also true that some hedge fund players fail inconceivably on some occasions, but net net their stock picks have been generating superior risk-adjusted returns on average over the years.

Mirati Therapeutics, Inc. (NASDAQ:MRTX) was in 28 hedge funds’ portfolios at the end of the first quarter of 2019. MRTX investors should pay attention to an increase in support from the world’s most elite money managers recently. There were 27 hedge funds in our database with MRTX holdings at the end of the previous quarter. Our calculations also showed that MRTX isn’t among the 30 most popular stocks among hedge funds.

How have hedgies been trading Mirati Therapeutics, Inc. (NASDAQ:MRTX)? 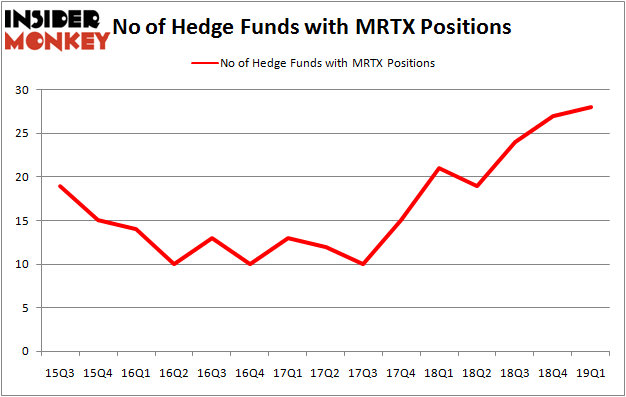 More specifically, venBio Select Advisor was the largest shareholder of Mirati Therapeutics, Inc. (NASDAQ:MRTX), with a stake worth $283.1 million reported as of the end of March. Trailing venBio Select Advisor was Baker Bros. Advisors, which amassed a stake valued at $184.2 million. Farallon Capital, Perceptive Advisors, and Cormorant Asset Management were also very fond of the stock, giving the stock large weights in their portfolios.

Consequently, specific money managers were breaking ground themselves. EcoR1 Capital, managed by Oleg Nodelman, created the most outsized call position in Mirati Therapeutics, Inc. (NASDAQ:MRTX). EcoR1 Capital had $25.6 million invested in the company at the end of the quarter. Christopher James’s Partner Fund Management also made a $8.8 million investment in the stock during the quarter. The following funds were also among the new MRTX investors: James A. Silverman’s Opaleye Management, Israel Englander’s Millennium Management, and Michael Castor’s Sio Capital.