Hedge Funds Have Never Been This Bullish On MGE Energy, Inc. (MGEE)

MGE Energy, Inc. (NASDAQ:MGEE) was in 13 hedge funds’ portfolios at the end of the second quarter of 2019. MGEE has seen an increase in support from the world’s most elite money managers of late. There were 9 hedge funds in our database with MGEE positions at the end of the previous quarter. Our calculations also showed that MGEE isn’t among the 30 most popular stocks among hedge funds (view the video below).

At the end of the second quarter, a total of 13 of the hedge funds tracked by Insider Monkey held long positions in this stock, a change of 44% from the previous quarter. By comparison, 8 hedge funds held shares or bullish call options in MGEE a year ago. With the smart money’s sentiment swirling, there exists an “upper tier” of noteworthy hedge fund managers who were upping their holdings meaningfully (or already accumulated large positions). 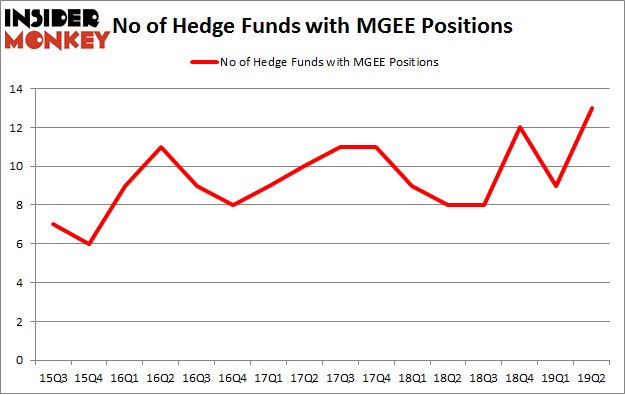 More specifically, Renaissance Technologies was the largest shareholder of MGE Energy, Inc. (NASDAQ:MGEE), with a stake worth $33.3 million reported as of the end of March. Trailing Renaissance Technologies was Millennium Management, which amassed a stake valued at $13.8 million. Citadel Investment Group, PDT Partners, and AQR Capital Management were also very fond of the stock, giving the stock large weights in their portfolios.

As aggregate interest increased, some big names have been driving this bullishness. Millennium Management, managed by Israel Englander, initiated the biggest position in MGE Energy, Inc. (NASDAQ:MGEE). Millennium Management had $13.8 million invested in the company at the end of the quarter. Paul Tudor Jones’s Tudor Investment Corp also made a $0.8 million investment in the stock during the quarter. The other funds with new positions in the stock are Matthew Hulsizer’s PEAK6 Capital Management, Minhua Zhang’s Weld Capital Management, and John Overdeck and David Siegel’s Two Sigma Advisors.

As you can see these stocks had an average of 14.25 hedge funds with bullish positions and the average amount invested in these stocks was $183 million. That figure was $54 million in MGEE’s case. United States Steel Corporation (NYSE:X) is the most popular stock in this table. On the other hand Industrias Bachoco, S.A.B. de C.V. (NYSE:IBA) is the least popular one with only 3 bullish hedge fund positions. MGE Energy, Inc. (NASDAQ:MGEE) is not the least popular stock in this group but hedge fund interest is still below average. Our calculations showed that top 20 most popular stocks among hedge funds returned 24.4% in 2019 through September 30th and outperformed the S&P 500 ETF (SPY) by 4 percentage points. A small number of hedge funds were also right about betting on MGEE as the stock returned 9.8% during the same time frame and outperformed the market by an even larger margin.