Hedge Funds Have Never Been This Bullish On McCormick & Company (MKC)

McCormick & Company, Incorporated (NYSE:MKC) shareholders have witnessed an increase in hedge fund sentiment lately. Our calculations also showed that MKC isn’t among the 30 most popular stocks among hedge funds (see the video below).

According to most traders, hedge funds are seen as unimportant, old financial tools of the past. While there are more than 8000 funds with their doors open today, Our experts choose to focus on the top tier of this group, approximately 750 funds. These investment experts administer most of the smart money’s total asset base, and by following their highest performing stock picks, Insider Monkey has come up with a few investment strategies that have historically outstripped the broader indices. Insider Monkey’s flagship hedge fund strategy outpaced the S&P 500 index by around 5 percentage points per year since its inception in May 2014. We were able to generate large returns even by identifying short candidates. Our portfolio of short stocks lost 25.7% since February 2017 (through September 30th) even though the market was up more than 33% during the same period. We just shared a list of 10 short targets in our latest quarterly update . 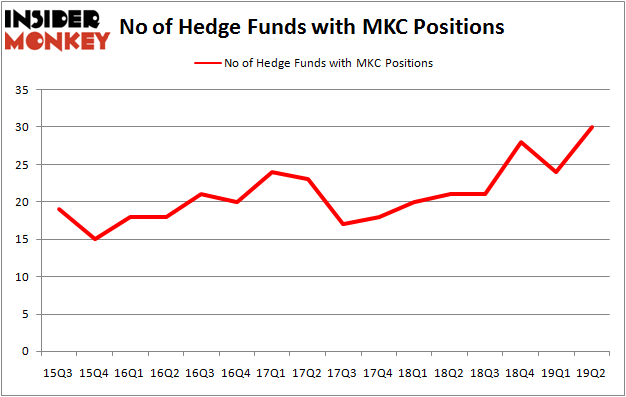 Unlike some fund managers who are betting on Dow reaching 40000 in a year, our long-short investment strategy doesn’t rely on bull markets to deliver double digit returns. We only rely on hedge fund buy/sell signals. Let’s take a gander at the latest hedge fund action regarding McCormick & Company, Incorporated (NYSE:MKC).

At Q2’s end, a total of 30 of the hedge funds tracked by Insider Monkey held long positions in this stock, a change of 25% from the first quarter of 2019. Below, you can check out the change in hedge fund sentiment towards MKC over the last 16 quarters. So, let’s see which hedge funds were among the top holders of the stock and which hedge funds were making big moves.

Of the funds tracked by Insider Monkey, Cliff Asness’s AQR Capital Management has the largest position in McCormick & Company, Incorporated (NYSE:MKC), worth close to $54.2 million, corresponding to 0.1% of its total 13F portfolio. Sitting at the No. 2 spot is Citadel Investment Group, managed by Ken Griffin, which holds a $40.8 million position; less than 0.1%% of its 13F portfolio is allocated to the company. Some other hedge funds and institutional investors that are bullish encompass George Soros’s Soros Fund Management, Phill Gross and Robert Atchinson’s Adage Capital Management and Joel Greenblatt’s Gotham Asset Management.

With a general bullishness amongst the heavyweights, some big names have jumped into McCormick & Company, Incorporated (NYSE:MKC) headfirst. Maverick Capital, managed by Lee Ainslie, initiated the largest position in McCormick & Company, Incorporated (NYSE:MKC). Maverick Capital had $5.6 million invested in the company at the end of the quarter. Brad Dunkley and Blair Levinsky’s Waratah Capital Advisors also made a $3.4 million investment in the stock during the quarter. The other funds with new positions in the stock are Ben Levine, Andrew Manuel and Stefan Renold’s LMR Partners, Ray Dalio’s Bridgewater Associates, and Matthew Hulsizer’s PEAK6 Capital Management.

As you can see these stocks had an average of 29.5 hedge funds with bullish positions and the average amount invested in these stocks was $1010 million. That figure was $215 million in MKC’s case. State Street Corporation (NYSE:STT) is the most popular stock in this table. On the other hand American Water Works Company, Inc. (NYSE:AWK) is the least popular one with only 23 bullish hedge fund positions. McCormick & Company, Incorporated (NYSE:MKC) is not the most popular stock in this group but hedge fund interest is still above average. This is a slightly positive signal but we’d rather spend our time researching stocks that hedge funds are piling on. Our calculations showed that top 20 most popular stocks among hedge funds returned 24.4% in 2019 through September 30th and outperformed the S&P 500 ETF (SPY) by 4 percentage points. Unfortunately MKC wasn’t nearly as popular as these 20 stocks and hedge funds that were betting on MKC were slightly disappointed as the stock returned 1.2% during the third quarter and underperformed the market. If you are interested in investing in large cap stocks with huge upside potential, you should check out the top 20 most popular stocks among hedge funds as many of these stocks already outperformed the market so far this year.