Hedge Funds Have Never Been This Bullish On MAXIMUS, Inc. (MMS)

Before we spend countless hours researching a company, we like to analyze what insiders, hedge funds and billionaire investors think of the stock first. This is a necessary first step in our investment process because our research has shown that the elite investors’ consensus returns have been exceptional. In the following paragraphs, we find out what the billionaire investors and hedge funds think of MAXIMUS, Inc. (NYSE:MMS).

Is MAXIMUS, Inc. (NYSE:MMS) an exceptional stock to buy now? Hedge funds are betting on the stock. The number of long hedge fund bets went up by 1 in recent months. Our calculations also showed that MMS isn’t among the 30 most popular stocks among hedge funds (click for Q3 rankings and see the video below for Q2 rankings).

Unlike the largest US hedge funds that are convinced Dow will soar past 40,000 or the world’s most bearish hedge fund that’s more convinced than ever that a crash is coming, our long-short investment strategy doesn’t rely on bull or bear markets to deliver double digit returns. We only rely on the best performing hedge funds‘ buy/sell signals. We’re going to check out the new hedge fund action surrounding MAXIMUS, Inc. (NYSE:MMS).

What have hedge funds been doing with MAXIMUS, Inc. (NYSE:MMS)?

Heading into the fourth quarter of 2019, a total of 23 of the hedge funds tracked by Insider Monkey were long this stock, a change of 5% from the previous quarter. On the other hand, there were a total of 20 hedge funds with a bullish position in MMS a year ago. With hedgies’ positions undergoing their usual ebb and flow, there exists a few notable hedge fund managers who were increasing their stakes substantially (or already accumulated large positions). 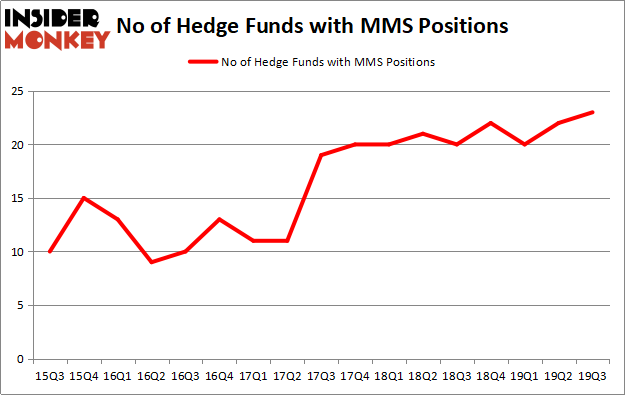 According to publicly available hedge fund and institutional investor holdings data compiled by Insider Monkey, P2 Capital Partners, managed by Claus Moller, holds the biggest position in MAXIMUS, Inc. (NYSE:MMS). P2 Capital Partners has a $96.5 million position in the stock, comprising 6.5% of its 13F portfolio. Coming in second is GLG Partners, managed by Noam Gottesman, which holds a $46.3 million position; 0.2% of its 13F portfolio is allocated to the stock. Remaining professional money managers that are bullish contain Cliff Asness’s AQR Capital Management, Peter Rathjens, Bruce Clarke and John Campbell’s Arrowstreet Capital and David Harding’s Winton Capital Management. In terms of the portfolio weights assigned to each position P2 Capital Partners allocated the biggest weight to MAXIMUS, Inc. (NYSE:MMS), around 6.52% of its 13F portfolio. GLG Partners is also relatively very bullish on the stock, designating 0.17 percent of its 13F equity portfolio to MMS.

As one would reasonably expect, key money managers were leading the bulls’ herd. Tudor Investment Corp, managed by Paul Tudor Jones, assembled the biggest position in MAXIMUS, Inc. (NYSE:MMS). Tudor Investment Corp had $1.8 million invested in the company at the end of the quarter. Michael Kharitonov and Jon David McAuliffe’s Voleon Capital also made a $1.5 million investment in the stock during the quarter. The following funds were also among the new MMS investors: Minhua Zhang’s Weld Capital Management, Matthew Hulsizer’s PEAK6 Capital Management, and Alec Litowitz and Ross Laser’s Magnetar Capital.

As you can see these stocks had an average of 12 hedge funds with bullish positions and the average amount invested in these stocks was $251 million. That figure was $224 million in MMS’s case. Kirby Corporation (NYSE:KEX) is the most popular stock in this table. On the other hand Millicom International Cellular S.A. (NASDAQ:TIGO) is the least popular one with only 6 bullish hedge fund positions. Compared to these stocks MAXIMUS, Inc. (NYSE:MMS) is more popular among hedge funds. Our calculations showed that top 20 most popular stocks among hedge funds returned 37.4% in 2019 through the end of November and outperformed the S&P 500 ETF (SPY) by 9.9 percentage points. Unfortunately MMS wasn’t nearly as popular as these 20 stocks and hedge funds that were betting on MMS were disappointed as the stock returned -3% during the first two months of the fourth quarter and underperformed the market. If you are interested in investing in large cap stocks with huge upside potential, you should check out the top 20 most popular stocks among hedge funds as 70 percent of these stocks already outperformed the market in Q4.