Is Matrix Service Co (NASDAQ:MTRX) going to take off soon? Investors who are in the know are becoming hopeful. The number of long hedge fund positions improved by 7 recently. Our calculations also showed that mtrx isn’t among the 30 most popular stocks among hedge funds. MTRX was in 19 hedge funds’ portfolios at the end of December. There were 12 hedge funds in our database with MTRX positions at the end of the previous quarter.

What does the smart money think about Matrix Service Co (NASDAQ:MTRX)? 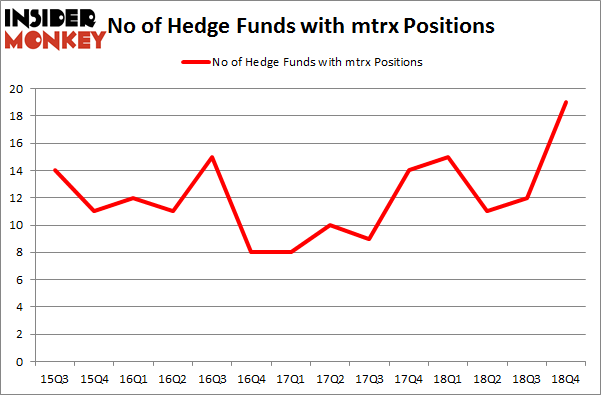 When looking at the institutional investors followed by Insider Monkey, Royce & Associates, managed by Chuck Royce, holds the most valuable position in Matrix Service Co (NASDAQ:MTRX). Royce & Associates has a $8.3 million position in the stock, comprising 0.1% of its 13F portfolio. Coming in second is AQR Capital Management, led by Cliff Asness, holding a $8 million position; the fund has less than 0.1%% of its 13F portfolio invested in the stock. Some other peers that hold long positions consist of Noam Gottesman’s GLG Partners, Peter Schliemann’s Rutabaga Capital Management and D. E. Shaw’s D E Shaw.