How do we determine whether Live Oak Bancshares Inc (NASDAQ:LOB) makes for a good investment at the moment? We analyze the sentiment of a select group of the very best investors in the world, who spend immense amounts of time and resources studying companies. They may not always be right (no one is), but data shows that their consensus long positions have historically outperformed the market when we adjust for known risk factors.

Live Oak Bancshares Inc (NASDAQ:LOB) investors should be aware of an increase in activity from the world’s largest hedge funds in recent months. Our calculations also showed that LOB isn’t among the 30 most popular stocks among hedge funds.

What does the smart money think about Live Oak Bancshares Inc (NASDAQ:LOB)?

At Q4’s end, a total of 11 of the hedge funds tracked by Insider Monkey were long this stock, a change of 38% from the previous quarter. By comparison, 7 hedge funds held shares or bullish call options in LOB a year ago. With the smart money’s capital changing hands, there exists an “upper tier” of notable hedge fund managers who were boosting their stakes significantly (or already accumulated large positions). 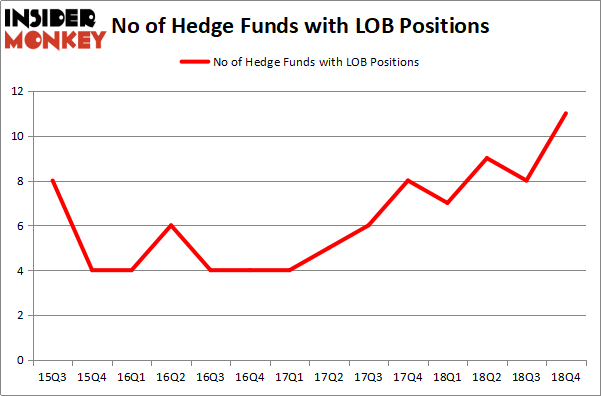 The largest stake in Live Oak Bancshares Inc (NASDAQ:LOB) was held by Mendon Capital Advisors, which reported holding $15.5 million worth of stock at the end of December. It was followed by Millennium Management with a $4.3 million position. Other investors bullish on the company included Citadel Investment Group, Marshall Wace LLP, and Driehaus Capital.

As one would reasonably expect, some big names have been driving this bullishness. Millennium Management, managed by Israel Englander, initiated the biggest position in Live Oak Bancshares Inc (NASDAQ:LOB). Millennium Management had $4.3 million invested in the company at the end of the quarter. Paul Marshall and Ian Wace’s Marshall Wace LLP also initiated a $1.9 million position during the quarter. The following funds were also among the new LOB investors: John Overdeck and David Siegel’s Two Sigma Advisors, Andrew Feldstein and Stephen Siderow’s Blue Mountain Capital, and Roger Ibbotson’s Zebra Capital Management.

As you can see these stocks had an average of 15.25 hedge funds with bullish positions and the average amount invested in these stocks was $50 million. That figure was $30 million in LOB’s case. US Concrete Inc (NASDAQ:USCR) is the most popular stock in this table. On the other hand Intellia Therapeutics, Inc. (NASDAQ:NTLA) is the least popular one with only 10 bullish hedge fund positions. Live Oak Bancshares Inc (NASDAQ:LOB) is not the least popular stock in this group but hedge fund interest is still below average. This is a slightly negative signal and we’d rather spend our time researching stocks that hedge funds are piling on. Our calculations showed that top 15 most popular stocks) among hedge funds returned 24.2% through April 22nd and outperformed the S&P 500 ETF (SPY) by more than 7 percentage points. Unfortunately LOB wasn’t nearly as popular as these 15 stock (hedge fund sentiment was quite bearish); LOB investors were disappointed as the stock returned 10.2% and underperformed the market. If you are interested in investing in large cap stocks with huge upside potential, you should check out the top 15 most popular stocks) among hedge funds as 13 of these stocks already outperformed the market this year.