Hedge Funds Have Never Been This Bullish On Linx S.A. (LINX)

There are several ways to beat the market, and investing in small cap stocks has historically been one of them. We like to improve the odds of beating the market further by examining what famous hedge fund operators such as Jeff Ubben, George Soros and Carl Icahn think. Those hedge fund operators make billions of dollars each year by hiring the best and the brightest to do research on stocks, including small cap stocks that big brokerage houses simply don’t cover. Because of Carl Icahn and other elite funds’ exemplary historical records, we pay attention to their small cap picks. In this article, we use hedge fund filing data to analyze Linx S.A. (NYSE:LINX).

Linx S.A. (NYSE:LINX) was in 14 hedge funds’ portfolios at the end of the second quarter of 2019. LINX investors should pay attention to an increase in hedge fund sentiment recently. There were 0 hedge funds in our database with LINX positions at the end of the previous quarter. Our calculations also showed that LINX isn’t among the 30 most popular stocks among hedge funds (see the video below).

According to most traders, hedge funds are seen as worthless, outdated financial vehicles of yesteryear. While there are over 8000 funds with their doors open at present, We hone in on the crème de la crème of this club, about 750 funds. These hedge fund managers shepherd bulk of the hedge fund industry’s total capital, and by shadowing their best picks, Insider Monkey has uncovered a number of investment strategies that have historically outrun the market. Insider Monkey’s flagship hedge fund strategy beat the S&P 500 index by around 5 percentage points a year since its inception in May 2014. We were able to generate large returns even by identifying short candidates. Our portfolio of short stocks lost 25.7% since February 2017 (through September 30th) even though the market was up more than 33% during the same period. We just shared a list of 10 short targets in our latest quarterly update . 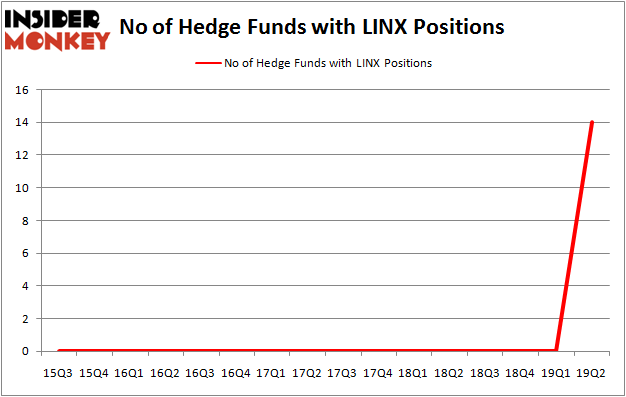 Unlike former hedge manager, Dr. Steve Sjuggerud, who is convinced Dow will soar past 40000, our long-short investment strategy doesn’t rely on bull markets to deliver double digit returns. We only rely on hedge fund buy/sell signals. We’re going to take a look at the recent hedge fund action regarding Linx S.A. (NYSE:LINX).

What have hedge funds been doing with Linx S.A. (NYSE:LINX)?

As you can see these stocks had an average of 14.75 hedge funds with bullish positions and the average amount invested in these stocks was $200 million. That figure was $84 million in LINX’s case. The Liberty Braves Group (NASDAQ:BATRK) is the most popular stock in this table. On the other hand The Liberty Braves Group (NASDAQ:BATRA) is the least popular one with only 9 bullish hedge fund positions. Linx S.A. (NYSE:LINX) is not the least popular stock in this group but hedge fund interest is still below average. This is a slightly negative signal and we’d rather spend our time researching stocks that hedge funds are piling on. Our calculations showed that top 20 most popular stocks among hedge funds returned 24.4% in 2019 through September 30th and outperformed the S&P 500 ETF (SPY) by 4 percentage points. Unfortunately LINX wasn’t nearly as popular as these 20 stocks (hedge fund sentiment was quite bearish); LINX investors were disappointed as the stock returned -15.2% during the third quarter and underperformed the market. If you are interested in investing in large cap stocks with huge upside potential, you should check out the top 20 most popular stocks among hedge funds as many of these stocks already outperformed the market so far in 2019.

Hedge Funds Have Never Been More Bullish On Pretium Resources Inc (PVG)
Monthly Newsletter Strategy
Download a free copy of our newsletter and see the details inside!
Hedge Fund Resource Center
Related News
11 Largest Auto Insurance Companies In The US In 2019 10 Poorest Cities in America in 2019 8 Lowest Tar and Nicotine Cigarette Brands in 2019
Billionaire Hedge Funds