The Insider Monkey team has completed processing the quarterly 13F filings for the September quarter submitted by the hedge funds and other money managers included in our extensive database. Most hedge fund investors experienced strong gains on the back of a strong market performance, which certainly propelled them to adjust their equity holdings so as to maintain the desired risk profile. As a result, the relevancy of these public filings and their content is indisputable, as they may reveal numerous high-potential stocks. The following article will discuss the smart money sentiment towards Linde plc (NYSE:LIN).

Is Linde plc (NYSE:LIN) a bargain? Money managers are getting more optimistic. The number of bullish hedge fund positions moved up by 3 lately. Our calculations also showed that LIN isn’t among the 30 most popular stocks among hedge funds.

To most stock holders, hedge funds are seen as slow, old financial tools of years past. While there are greater than 8000 funds with their doors open at the moment, Our experts look at the top tier of this club, approximately 750 funds. It is estimated that this group of investors have their hands on the majority of the smart money’s total asset base, and by keeping an eye on their unrivaled equity investments, Insider Monkey has formulated a few investment strategies that have historically beaten the broader indices. Insider Monkey’s flagship short hedge fund strategy defeated the S&P 500 short ETFs by around 20 percentage points a year since its inception in May 2014. Our portfolio of short stocks lost 27.8% since February 2017 (through November 21st) even though the market was up more than 39% during the same period. We just shared a list of 7 short targets in our latest quarterly update .

Unlike the largest US hedge funds that are convinced Dow will soar past 40,000 or the world’s most bearish hedge fund that’s more convinced than ever that a crash is coming, our long-short investment strategy doesn’t rely on bull or bear markets to deliver double digit returns. We only rely on the best performing hedge funds‘ buy/sell signals. Let’s analyze the latest hedge fund action regarding Linde plc (NYSE:LIN). 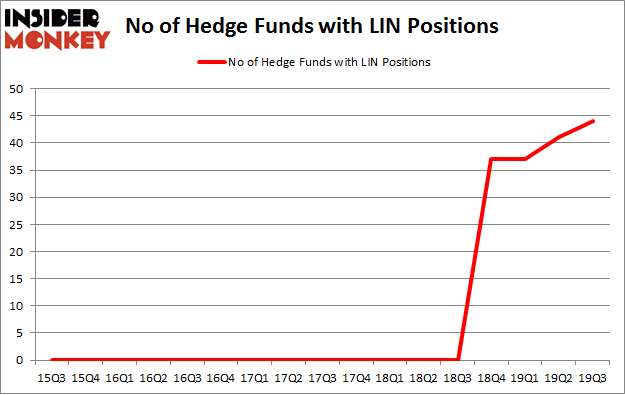 More specifically, D1 Capital Partners was the largest shareholder of Linde plc (NYSE:LIN), with a stake worth $321.6 million reported as of the end of September. Trailing D1 Capital Partners was Steadfast Capital Management, which amassed a stake valued at $263.2 million. Holocene Advisors, Polaris Capital Management, and Diamond Hill Capital were also very fond of the stock, becoming one of the largest hedge fund holders of the company. In terms of the portfolio weights assigned to each position Polaris Capital Management allocated the biggest weight to Linde plc (NYSE:LIN), around 9.33% of its portfolio. VGI Partners is also relatively very bullish on the stock, setting aside 8.72 percent of its 13F equity portfolio to LIN.

As aggregate interest increased, some big names have jumped into Linde plc (NYSE:LIN) headfirst. Soroban Capital Partners, managed by Eric W. Mandelblatt and Gaurav Kapadia, assembled the most outsized position in Linde plc (NYSE:LIN). Soroban Capital Partners had $68.6 million invested in the company at the end of the quarter. Peter Muller’s PDT Partners also made a $46.2 million investment in the stock during the quarter. The other funds with brand new LIN positions are Zach Schreiber’s Point State Capital, Greg Poole’s Echo Street Capital Management, and Alexander Mitchell’s Scopus Asset Management.

As you can see these stocks had an average of 40.25 hedge funds with bullish positions and the average amount invested in these stocks was $6562 million. That figure was $2523 million in LIN’s case. Danaher Corporation (NYSE:DHR) is the most popular stock in this table. On the other hand ASML Holding N.V. (NASDAQ:ASML) is the least popular one with only 15 bullish hedge fund positions. Linde plc (NYSE:LIN) is not the most popular stock in this group but hedge fund interest is still above average. Our calculations showed that top 20 most popular stocks among hedge funds returned 34.7% in 2019 through November 22nd and outperformed the S&P 500 ETF (SPY) by 8.5 percentage points. Hedge funds were also right about betting on LIN, though not to the same extent, as the stock returned 5.8% during the fourth quarter (through 11/22) and outperformed the market as well.