With the first-quarter round of 13F filings behind us it is time to take a look at the stocks in which some of the best money managers in the world preferred to invest or sell heading into the second quarter. One of these stocks was Kilroy Realty Corp (NYSE:KRC).

Is Kilroy Realty Corp (NYSE:KRC) going to take off soon? Hedge funds are betting on the stock. The number of bullish hedge fund bets moved up by 5 recently. Our calculations also showed that KRC isn’t among the 30 most popular stocks among hedge funds (see the video below). KRC was in 16 hedge funds’ portfolios at the end of the second quarter of 2019. There were 11 hedge funds in our database with KRC holdings at the end of the previous quarter. 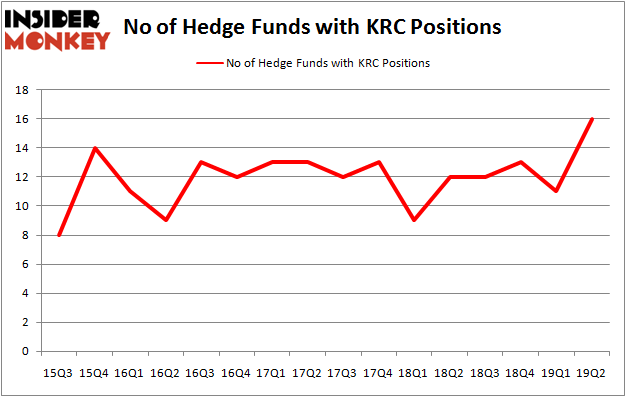 Unlike this former hedge fund manager who is convinced Dow will soar past 40000, our long-short investment strategy doesn’t rely on bull markets to deliver double digit returns. We only rely on hedge fund buy/sell signals. Let’s take a look at the fresh hedge fund action surrounding Kilroy Realty Corp (NYSE:KRC).

At the end of the second quarter, a total of 16 of the hedge funds tracked by Insider Monkey held long positions in this stock, a change of 45% from the first quarter of 2019. The graph below displays the number of hedge funds with bullish position in KRC over the last 16 quarters. So, let’s review which hedge funds were among the top holders of the stock and which hedge funds were making big moves.

The largest stake in Kilroy Realty Corp (NYSE:KRC) was held by Citadel Investment Group, which reported holding $53.3 million worth of stock at the end of March. It was followed by Zimmer Partners with a $50 million position. Other investors bullish on the company included Renaissance Technologies, Millennium Management, and Adage Capital Management.

With a general bullishness amongst the heavyweights, key hedge funds were leading the bulls’ herd. Balyasny Asset Management, managed by Dmitry Balyasny, initiated the most outsized position in Kilroy Realty Corp (NYSE:KRC). Balyasny Asset Management had $6.3 million invested in the company at the end of the quarter. Anand Parekh’s Alyeska Investment Group also made a $5.4 million investment in the stock during the quarter. The other funds with new positions in the stock are Gavin Saitowitz and Cisco J. del Valle’s Springbok Capital, Daniel Johnson’s Gillson Capital, and D. E. Shaw’s D E Shaw.

As you can see these stocks had an average of 20.75 hedge funds with bullish positions and the average amount invested in these stocks was $849 million. That figure was $162 million in KRC’s case. The Middleby Corporation (NASDAQ:MIDD) is the most popular stock in this table. On the other hand BeiGene, Ltd. (NASDAQ:BGNE) is the least popular one with only 12 bullish hedge fund positions. Kilroy Realty Corp (NYSE:KRC) is not the least popular stock in this group but hedge fund interest is still below average. Our calculations showed that top 20 most popular stocks among hedge funds returned 24.4% in 2019 through September 30th and outperformed the S&P 500 ETF (SPY) by 4 percentage points. A small number of hedge funds were also right about betting on KRC as the stock returned 6.2% during the same time frame and outperformed the market by an even larger margin.