With the first-quarter round of 13F filings behind us it is time to take a look at the stocks in which some of the best money managers in the world preferred to invest or sell heading into the second quarter. One of these stocks was Kilroy Realty Corp (NYSE:KRC).

Kilroy Realty Corp (NYSE:KRC) has experienced an increase in activity from the world’s largest hedge funds in recent months. Our calculations also showed that KRC isn’t among the 30 most popular stocks among hedge funds (click for Q3 rankings and see the video below for Q2 rankings).

Unlike the largest US hedge funds that are convinced Dow will soar past 40,000 or the world’s most bearish hedge fund that’s more convinced than ever that a crash is coming, our long-short investment strategy doesn’t rely on bull or bear markets to deliver double digit returns. We only rely on the best performing hedge funds‘ buy/sell signals. Let’s take a gander at the recent hedge fund action encompassing Kilroy Realty Corp (NYSE:KRC).

What have hedge funds been doing with Kilroy Realty Corp (NYSE:KRC)?

At the end of the third quarter, a total of 23 of the hedge funds tracked by Insider Monkey were long this stock, a change of 44% from the second quarter of 2019. By comparison, 12 hedge funds held shares or bullish call options in KRC a year ago. With hedgies’ sentiment swirling, there exists an “upper tier” of notable hedge fund managers who were boosting their holdings considerably (or already accumulated large positions). 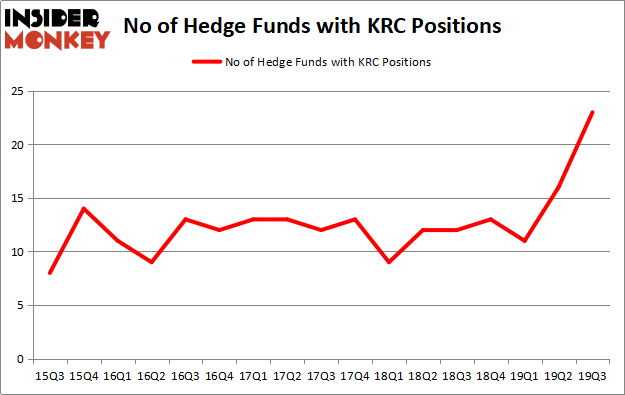 When looking at the institutional investors followed by Insider Monkey, John Khoury’s Long Pond Capital has the biggest position in Kilroy Realty Corp (NYSE:KRC), worth close to $53.7 million, comprising 1.4% of its total 13F portfolio. The second largest stake is held by Israel Englander of Millennium Management, with a $32.7 million position; the fund has 0.1% of its 13F portfolio invested in the stock. Some other members of the smart money with similar optimism contain Ken Griffin’s Citadel Investment Group, Stuart J. Zimmer’s Zimmer Partners and Dmitry Balyasny’s Balyasny Asset Management. In terms of the portfolio weights assigned to each position Long Pond Capital allocated the biggest weight to Kilroy Realty Corp (NYSE:KRC), around 1.4% of its 13F portfolio. Gillson Capital is also relatively very bullish on the stock, designating 0.58 percent of its 13F equity portfolio to KRC.

With a general bullishness amongst the heavyweights, some big names were breaking ground themselves. Long Pond Capital, managed by John Khoury, assembled the most outsized position in Kilroy Realty Corp (NYSE:KRC). Long Pond Capital had $53.7 million invested in the company at the end of the quarter. David Harding’s Winton Capital Management also made a $2.1 million investment in the stock during the quarter. The following funds were also among the new KRC investors: Benjamin A. Smith’s Laurion Capital Management, Richard Driehaus’s Driehaus Capital, and Ken Griffin’s Citadel Investment Group.

Let’s also examine hedge fund activity in other stocks – not necessarily in the same industry as Kilroy Realty Corp (NYSE:KRC) but similarly valued. We will take a look at PTC Inc (NASDAQ:PTC), Athene Holding Ltd. (NYSE:ATH), A. O. Smith Corporation (NYSE:AOS), and The Toro Company (NYSE:TTC). All of these stocks’ market caps resemble KRC’s market cap.

As you can see these stocks had an average of 26.25 hedge funds with bullish positions and the average amount invested in these stocks was $820 million. That figure was $218 million in KRC’s case. Athene Holding Ltd. (NYSE:ATH) is the most popular stock in this table. On the other hand A. O. Smith Corporation (NYSE:AOS) is the least popular one with only 18 bullish hedge fund positions. Kilroy Realty Corp (NYSE:KRC) is not the least popular stock in this group but hedge fund interest is still below average. Our calculations showed that top 20 most popular stocks among hedge funds returned 37.4% in 2019 through the end of November and outperformed the S&P 500 ETF (SPY) by 9.9 percentage points. A small number of hedge funds were also right about betting on KRC, though not to the same extent, as the stock returned 6.9% during the first two months of the fourth quarter and outperformed the market.