Hedge Funds Have Never Been This Bullish On Jack in the Box Inc. (JACK)

While the market driven by short-term sentiment influenced by the accomodative interest rate environment in the US, increasing oil prices and optimism towards the resolution of the trade war with China, many smart money investors kept their cautious approach regarding the current bull run in the first quarter and hedging or reducing many of their long positions. However, as we know, big investors usually buy stocks with strong fundamentals, which is why we believe we can profit from imitating them. In this article, we are going to take a look at the smart money sentiment surrounding Jack in the Box Inc. (NASDAQ:JACK).

Is Jack in the Box Inc. (NASDAQ:JACK) a cheap investment now? Money managers are becoming hopeful. The number of bullish hedge fund positions increased by 7 in recent months. Our calculations also showed that jack isn’t among the 30 most popular stocks among hedge funds.

We’re going to take a look at the key hedge fund action surrounding Jack in the Box Inc. (NASDAQ:JACK).

What does the smart money think about Jack in the Box Inc. (NASDAQ:JACK)?

At the end of the first quarter, a total of 36 of the hedge funds tracked by Insider Monkey were long this stock, a change of 24% from one quarter earlier. Below, you can check out the change in hedge fund sentiment towards JACK over the last 15 quarters. With the smart money’s positions undergoing their usual ebb and flow, there exists an “upper tier” of noteworthy hedge fund managers who were adding to their stakes significantly (or already accumulated large positions). 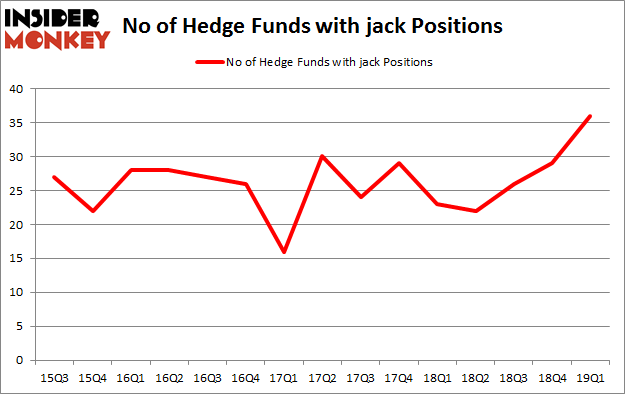 According to Insider Monkey’s hedge fund database, Blue Harbour Group, managed by Clifton S. Robbins, holds the largest position in Jack in the Box Inc. (NASDAQ:JACK). Blue Harbour Group has a $130.1 million position in the stock, comprising 7.6% of its 13F portfolio. The second largest stake is held by Citadel Investment Group, managed by Ken Griffin, which holds a $78.4 million position; the fund has less than 0.1%% of its 13F portfolio invested in the stock. Remaining members of the smart money that hold long positions comprise Barry Rosenstein’s JANA Partners, Israel Englander’s Millennium Management and Robert Pohly’s Samlyn Capital.

As industrywide interest jumped, key money managers have jumped into Jack in the Box Inc. (NASDAQ:JACK) headfirst. Interval Partners, managed by Gregg Moskowitz, assembled the most valuable position in Jack in the Box Inc. (NASDAQ:JACK). Interval Partners had $14.2 million invested in the company at the end of the quarter. Jim Simons’s Renaissance Technologies also made a $12.5 million investment in the stock during the quarter. The other funds with new positions in the stock are Steven Boyd’s Armistice Capital, Elise Di Vincenzo Crumbine’s Stormborn Capital Management, and Leon Shaulov’s Maplelane Capital.

As you can see these stocks had an average of 15.75 hedge funds with bullish positions and the average amount invested in these stocks was $148 million. That figure was $645 million in JACK’s case. Regenxbio Inc (NASDAQ:RGNX) is the most popular stock in this table. On the other hand TransAlta Corporation (NYSE:TAC) is the least popular one with only 11 bullish hedge fund positions. Compared to these stocks Jack in the Box Inc. (NASDAQ:JACK) is more popular among hedge funds. Our calculations showed that top 20 most popular stocks among hedge funds returned 1.9% in Q2 through May 30th and outperformed the S&P 500 ETF (SPY) by more than 3 percentage points. Hedge funds were also right about betting on JACK as the stock returned 2% during the same period and outperformed the market by an even larger margin. Hedge funds were clearly right about piling into this stock relative to other stocks with similar market capitalizations.

Is Royal Caribbean Cruises Ltd. (RCL) A Good Stock To Buy?
Monthly Newsletter Strategy
Download a free copy of our newsletter and see the details inside!
Hedge Fund Resource Center
Related News
Here is What Hedge Funds Think About Jack in the Box Inc. (JACK) Jack in the Box Inc. (JACK): Are Hedge Funds Right About This Stock? Muscle Maker Grill: Fast Casual Chain That Has Lots of Potential Despite Industry Slowdown 32 Major Stories That You Should Read From the World of Finance Today 16 Healthiest Fast Food Menu Items and Restaurants: Should You Invest Healthful? Moe’s vs Chipotle vs Qdoba & Others: Where People Are Eating? The 5 Creepiest Spokesmen Ever: What Were These Companies Thinking? 21 Best Tinder Bio Examples for Newly Single Moms 17 Best Excuses to Get Out of Work 25 Best Bumble Bios For Girls
Billionaire Hedge Funds