Hedge Funds Have Never Been This Bullish On Ironwood Pharmaceuticals, Inc. (IRWD)

While the market driven by short-term sentiment influenced by the accomodative interest rate environment in the US, increasing oil prices and optimism towards the resolution of the trade war with China, many smart money investors kept their cautious approach regarding the current bull run in the first quarter and hedging or reducing many of their long positions. However, as we know, big investors usually buy stocks with strong fundamentals, which is why we believe we can profit from imitating them. In this article, we are going to take a look at the smart money sentiment surrounding Ironwood Pharmaceuticals, Inc. (NASDAQ:IRWD).

Is Ironwood Pharmaceuticals, Inc. (NASDAQ:IRWD) the right pick for your portfolio? Money managers are becoming more confident. The number of bullish hedge fund positions moved up by 6 recently. Our calculations also showed that irwd isn’t among the 30 most popular stocks among hedge funds. IRWD was in 23 hedge funds’ portfolios at the end of the first quarter of 2019. There were 17 hedge funds in our database with IRWD positions at the end of the previous quarter.

If you’d ask most stock holders, hedge funds are viewed as worthless, old investment tools of yesteryear. While there are greater than 8000 funds with their doors open today, We look at the masters of this club, about 750 funds. These hedge fund managers administer the lion’s share of the smart money’s total capital, and by paying attention to their best stock picks, Insider Monkey has deciphered a few investment strategies that have historically exceeded the S&P 500 index. Insider Monkey’s flagship hedge fund strategy defeated the S&P 500 index by around 5 percentage points per annum since its inception in May 2014 through the end of May. We were able to generate large returns even by identifying short candidates. Our portfolio of short stocks lost 30.9% since February 2017 (through May 30th) even though the market was up nearly 24% during the same period. We just shared a list of 5 short targets in our latest quarterly update and they are already down an average of 11.9% in less than a couple of weeks whereas our long picks outperformed the market by 2 percentage points in this volatile 2 week period.

How have hedgies been trading Ironwood Pharmaceuticals, Inc. (NASDAQ:IRWD)? 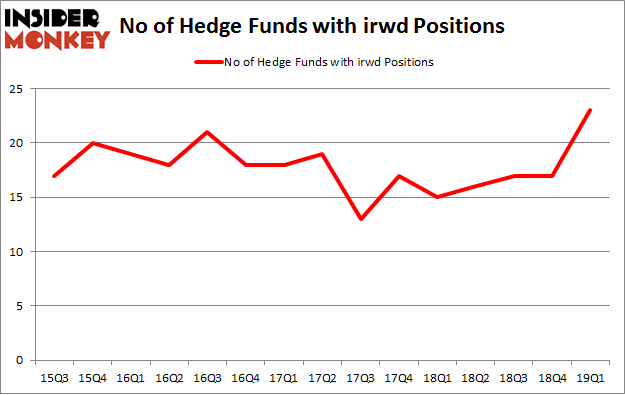 More specifically, Sarissa Capital Management was the largest shareholder of Ironwood Pharmaceuticals, Inc. (NASDAQ:IRWD), with a stake worth $102 million reported as of the end of March. Trailing Sarissa Capital Management was MFN Partners, which amassed a stake valued at $66.8 million. EcoR1 Capital, Bridger Management, and Citadel Investment Group were also very fond of the stock, giving the stock large weights in their portfolios.

As aggregate interest increased, some big names were leading the bulls’ herd. Healthcor Management LP, managed by Arthur B Cohen and Joseph Healey, created the most valuable position in Ironwood Pharmaceuticals, Inc. (NASDAQ:IRWD). Healthcor Management LP had $10.1 million invested in the company at the end of the quarter. Bain Capital’s Brookside Capital also made a $5.5 million investment in the stock during the quarter. The following funds were also among the new IRWD investors: Howard Marks’s Oaktree Capital Management, Jim Simons’s Renaissance Technologies, and Kamran Moghtaderi’s Eversept Partners.

As you can see these stocks had an average of 20.75 hedge funds with bullish positions and the average amount invested in these stocks was $282 million. That figure was $421 million in IRWD’s case. Jack in the Box Inc. (NASDAQ:JACK) is the most popular stock in this table. On the other hand TransAlta Corporation (NYSE:TAC) is the least popular one with only 11 bullish hedge fund positions. Ironwood Pharmaceuticals, Inc. (NASDAQ:IRWD) is not the most popular stock in this group but hedge fund interest is still above average. This is a slightly positive signal but we’d rather spend our time researching stocks that hedge funds are piling on. Our calculations showed that top 20 most popular stocks among hedge funds returned 1.9% in Q2 through May 30th and outperformed the S&P 500 ETF (SPY) by more than 3 percentage points. Unfortunately IRWD wasn’t nearly as popular as these 20 stocks and hedge funds that were betting on IRWD were disappointed as the stock returned -3.1% during the same period and underperformed the market. If you are interested in investing in large cap stocks with huge upside potential, you should check out the top 20 most popular stocks among hedge funds as 13 of these stocks already outperformed the market so far in Q2.