Hedge Funds Have Never Been This Bullish On International Money Express, Inc. (IMXI)

Is International Money Express, Inc. (NASDAQ:IMXI) a good place to invest some of your money right now? We can gain invaluable insight to help us answer that question by studying the investment trends of top investors, who employ world-class Ivy League graduates, who are given immense resources and industry contacts to put their financial expertise to work. The top picks of these firms have historically outperformed the market when we account for known risk factors, making them very valuable investment ideas.

Is International Money Express, Inc. (NASDAQ:IMXI) the right pick for your portfolio? Prominent investors are becoming hopeful. The number of bullish hedge fund positions went up by 2 recently. Our calculations also showed that IMXI isn’t among the 30 most popular stocks among hedge funds (click for Q3 rankings and see the video below for Q2 rankings). IMXI was in 14 hedge funds’ portfolios at the end of September. There were 12 hedge funds in our database with IMXI holdings at the end of the previous quarter.

We leave no stone unturned when looking for the next great investment idea. For example Discover is offering this insane cashback card, so we look into shorting the stock. One of the most bullish analysts in America just put his money where his mouth is. He says, “I’m investing more today than I did back in early 2009.” So we check out his pitch. We read hedge fund investor letters and listen to stock pitches at hedge fund conferences. We even check out this option genius’ weekly trade ideas. This December, we recommended Adams Energy as a one-way bet based on an under-the-radar fund manager’s investor letter and the stock already gained 20 percent. Now we’re going to take a look at the latest hedge fund action surrounding International Money Express, Inc. (NASDAQ:IMXI).

What have hedge funds been doing with International Money Express, Inc. (NASDAQ:IMXI)?

At the end of the third quarter, a total of 14 of the hedge funds tracked by Insider Monkey held long positions in this stock, a change of 17% from the second quarter of 2019. The graph below displays the number of hedge funds with bullish position in IMXI over the last 17 quarters. So, let’s find out which hedge funds were among the top holders of the stock and which hedge funds were making big moves. 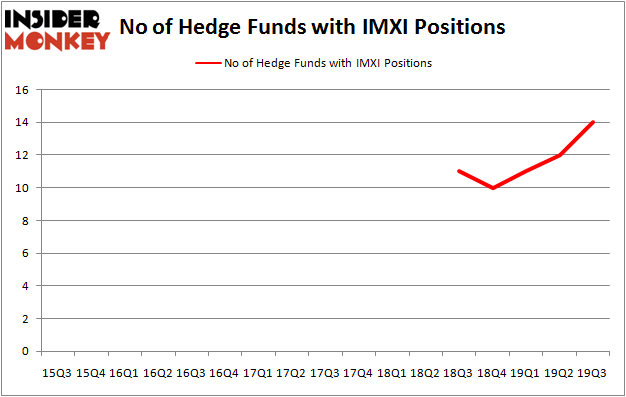 Of the funds tracked by Insider Monkey, Nantahala Capital Management, managed by Wilmot B. Harkey and Daniel Mack, holds the number one position in International Money Express, Inc. (NASDAQ:IMXI). Nantahala Capital Management has a $30.9 million position in the stock, comprising 1.1% of its 13F portfolio. Coming in second is Headlands Capital, managed by David Park, which holds a $22 million position; the fund has 15.4% of its 13F portfolio invested in the stock. Other peers with similar optimism comprise Parsa Kiai’s Steamboat Capital Partners, George McCabe’s Portolan Capital Management and Mark Coe’s Intrinsic Edge Capital. In terms of the portfolio weights assigned to each position Headlands Capital allocated the biggest weight to International Money Express, Inc. (NASDAQ:IMXI), around 15.39% of its 13F portfolio. Steamboat Capital Partners is also relatively very bullish on the stock, setting aside 6.49 percent of its 13F equity portfolio to IMXI.

As one would reasonably expect, specific money managers were leading the bulls’ herd. Intrinsic Edge Capital, managed by Mark Coe, established the most valuable position in International Money Express, Inc. (NASDAQ:IMXI). Intrinsic Edge Capital had $4.4 million invested in the company at the end of the quarter. Paul Marshall and Ian Wace’s Marshall Wace also made a $0.9 million investment in the stock during the quarter. The other funds with brand new IMXI positions are Paul Tudor Jones’s Tudor Investment Corp, Benjamin A. Smith’s Laurion Capital Management, and David Harding’s Winton Capital Management.

As you can see these stocks had an average of 14 hedge funds with bullish positions and the average amount invested in these stocks was $70 million. That figure was $97 million in IMXI’s case. Flexion Therapeutics Inc (NASDAQ:FLXN) is the most popular stock in this table. On the other hand WideOpenWest, Inc. (NYSE:WOW) is the least popular one with only 13 bullish hedge fund positions. International Money Express, Inc. (NASDAQ:IMXI) is not the least popular stock in this group but hedge fund interest is still below average. This is a slightly negative signal and we’d rather spend our time researching stocks that hedge funds are piling on. Our calculations showed that top 20 most popular stocks among hedge funds returned 37.4% in 2019 through the end of November and outperformed the S&P 500 ETF (SPY) by 9.9 percentage points. Unfortunately IMXI wasn’t nearly as popular as these 20 stocks (hedge fund sentiment was quite bearish); IMXI investors were disappointed as the stock returned -1.1% during the first two months of the fourth quarter and underperformed the market. If you are interested in investing in large cap stocks with huge upside potential, you should check out the top 20 most popular stocks among hedge funds as 70 percent of these stocks already outperformed the market in Q4.