Hedge Funds Have Never Been This Bullish On i3 Verticals, Inc. (IIIV)

Is i3 Verticals, Inc. (NASDAQ:IIIV) a good equity to bet on right now? We like to check what the smart money thinks first before doing extensive research on a given stock. Although there have been several high profile failed hedge fund picks, the consensus picks among hedge fund investors have historically outperformed the market after adjusting for known risk attributes. It’s not surprising given that hedge funds have access to better information and more resources to predict the winners in the stock market.

i3 Verticals, Inc. (NASDAQ:IIIV) investors should pay attention to an increase in hedge fund sentiment of late. Our calculations also showed that IIIV isn’t among the 30 most popular stocks among hedge funds (see the video below).

To the average investor there are a lot of methods shareholders have at their disposal to value publicly traded companies. A couple of the most useful methods are hedge fund and insider trading moves. We have shown that, historically, those who follow the best picks of the elite investment managers can outperform the broader indices by a significant margin (see the details here).

Unlike former hedge manager, Dr. Steve Sjuggerud, who is convinced Dow will soar past 40000, our long-short investment strategy doesn’t rely on bull markets to deliver double digit returns. We only rely on hedge fund buy/sell signals. We’re going to analyze the latest hedge fund action regarding i3 Verticals, Inc. (NASDAQ:IIIV).

How have hedgies been trading i3 Verticals, Inc. (NASDAQ:IIIV)?

At Q2’s end, a total of 13 of the hedge funds tracked by Insider Monkey were bullish on this stock, a change of 63% from the first quarter of 2019. By comparison, 11 hedge funds held shares or bullish call options in IIIV a year ago. With the smart money’s positions undergoing their usual ebb and flow, there exists a few noteworthy hedge fund managers who were increasing their stakes significantly (or already accumulated large positions). 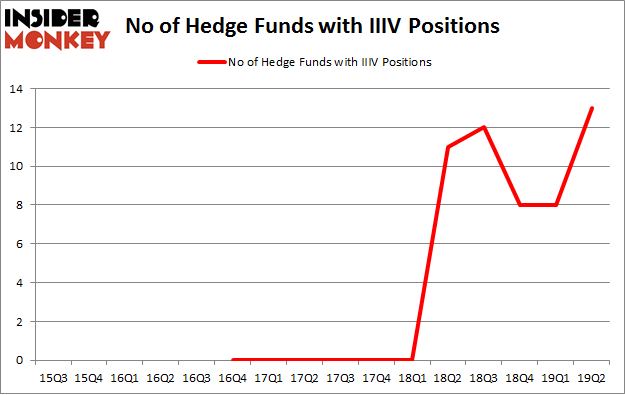 The largest stake in i3 Verticals, Inc. (NASDAQ:IIIV) was held by Harbert Management, which reported holding $20.6 million worth of stock at the end of March. It was followed by Driehaus Capital with a $16.7 million position. Other investors bullish on the company included ACK Asset Management, Crosslink Capital, and D E Shaw.

As industrywide interest jumped, key money managers have been driving this bullishness. ACK Asset Management, managed by Richard S. Meisenberg, assembled the biggest position in i3 Verticals, Inc. (NASDAQ:IIIV). ACK Asset Management had $15.3 million invested in the company at the end of the quarter. D. E. Shaw’s D E Shaw also made a $1.9 million investment in the stock during the quarter. The other funds with new positions in the stock are Renaissance Technologies, Anand Parekh’s Alyeska Investment Group, and Ken Griffin’s Citadel Investment Group.

As you can see these stocks had an average of 16.75 hedge funds with bullish positions and the average amount invested in these stocks was $111 million. That figure was $72 million in IIIV’s case. Pacific Biosciences of California, Inc. (NASDAQ:PACB) is the most popular stock in this table. On the other hand The Greenbrier Companies, Inc. (NYSE:GBX) is the least popular one with only 14 bullish hedge fund positions. Compared to these stocks i3 Verticals, Inc. (NASDAQ:IIIV) is even less popular than GBX. Hedge funds dodged a bullet by taking a bearish stance towards IIIV. Our calculations showed that the top 20 most popular hedge fund stocks returned 24.4% in 2019 through September 30th and outperformed the S&P 500 ETF (SPY) by 4 percentage points. Unfortunately IIIV wasn’t nearly as popular as these 20 stocks (hedge fund sentiment was very bearish); IIIV investors were disappointed as the stock returned -31.7% during the third quarter and underperformed the market. If you are interested in investing in large cap stocks with huge upside potential, you should check out the top 20 most popular stocks among hedge funds as many of these stocks already outperformed the market so far in 2019.

Here is What Hedge Funds Think About Calavo Growers, Inc. (CVGW)
Monthly Newsletter Strategy
Download a free copy of our newsletter and see the details inside!
Hedge Fund Resource Center
Related News
Is i3 Verticals, Inc. (IIIV) A Good Stock To Buy? 3 Hot IPOs With Insider Buying Activity 11 Largest Auto Insurance Companies In The US In 2019 10 Poorest Cities in America in 2019 8 Lowest Tar and Nicotine Cigarette Brands in 2019
Billionaire Hedge Funds