Hedge Funds Have Never Been This Bullish On HubSpot Inc (HUBS)

Is HubSpot Inc (NYSE:HUBS) a healthy stock for your portfolio? Prominent investors are taking an optimistic view. The number of long hedge fund positions rose by 7 in recent months. Our calculations also showed that hubs isn’t among the 30 most popular stocks among hedge funds.

Today there are tons of methods stock market investors have at their disposal to value publicly traded companies. A duo of the less utilized methods are hedge fund and insider trading moves. We have shown that, historically, those who follow the best picks of the best money managers can outclass the S&P 500 by a healthy margin (see the details here).

What have hedge funds been doing with HubSpot Inc (NYSE:HUBS)? 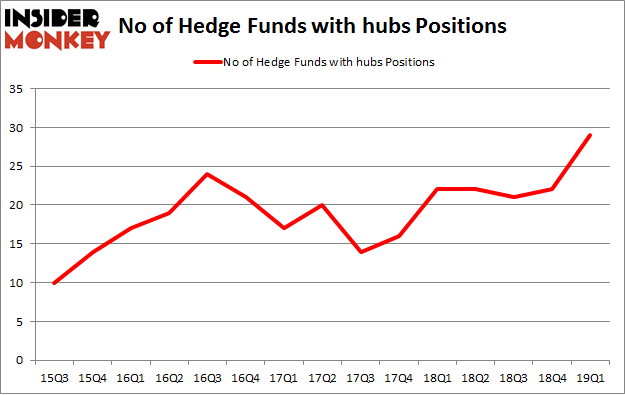 Among these funds, SCGE Management held the most valuable stake in HubSpot Inc (NYSE:HUBS), which was worth $132.8 million at the end of the first quarter. On the second spot was Two Sigma Advisors which amassed $107.5 million worth of shares. Moreover, Renaissance Technologies, Alkeon Capital Management, and Millennium Management were also bullish on HubSpot Inc (NYSE:HUBS), allocating a large percentage of their portfolios to this stock.

As aggregate interest increased, some big names have been driving this bullishness. Arrowstreet Capital, managed by Peter Rathjens, Bruce Clarke and John Campbell, established the most outsized position in HubSpot Inc (NYSE:HUBS). Arrowstreet Capital had $36.5 million invested in the company at the end of the quarter. Matthew Hulsizer’s PEAK6 Capital Management also initiated a $7.6 million position during the quarter. The other funds with new positions in the stock are Sander Gerber’s Hudson Bay Capital Management, Michael Platt and William Reeves’s BlueCrest Capital Mgmt., and David Costen Haley’s HBK Investments.

As you can see these stocks had an average of 18.5 hedge funds with bullish positions and the average amount invested in these stocks was $424 million. That figure was $622 million in HUBS’s case. Arrow Electronics, Inc. (NYSE:ARW) is the most popular stock in this table. On the other hand Logitech International SA (NASDAQ:LOGI) is the least popular one with only 15 bullish hedge fund positions. Compared to these stocks HubSpot Inc (NYSE:HUBS) is more popular among hedge funds. Our calculations showed that top 20 most popular stocks among hedge funds returned 1.9% in Q2 through May 30th and outperformed the S&P 500 ETF (SPY) by more than 3 percentage points. Hedge funds were also right about betting on HUBS as the stock returned 6.5% during the same period and outperformed the market by an even larger margin. Hedge funds were clearly right about piling into this stock relative to other stocks with similar market capitalizations.