Is HubSpot Inc (HUBS) A Good Stock To Buy?

Is HubSpot Inc (NYSE:HUBS) a good equity to bet on right now? We like to check what the smart money thinks first before doing extensive research. Although there have been several high profile failed hedge fund picks, the consensus picks among hedge fund investors have historically outperformed the market after adjusting for known risk attributes. It’s not surprising given that hedge funds have access to better information and more resources to find the latest market-moving information.

HubSpot Inc (NYSE:HUBS) investors should pay attention to a decrease in enthusiasm from smart money in recent months. Our calculations also showed that HUBS isn’t among the 30 most popular stocks among hedge funds. 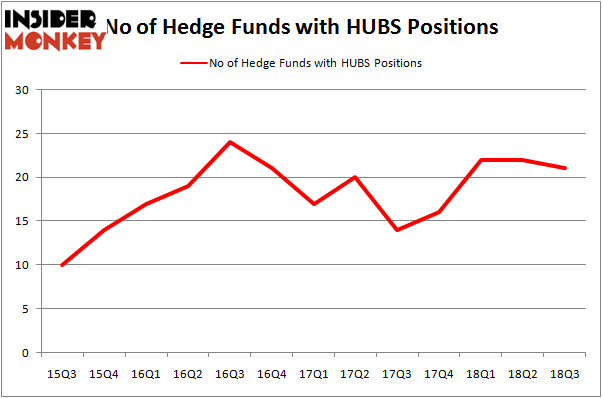 The largest stake in HubSpot Inc (NYSE:HUBS) was held by SCGE Management, which reported holding $132.6 million worth of stock at the end of September. It was followed by Alkeon Capital Management with a $83.7 million position. Other investors bullish on the company included Two Sigma Advisors, Renaissance Technologies, and Polar Capital.

Due to the fact that HubSpot Inc (NYSE:HUBS) has experienced a decline in interest from hedge fund managers, it’s safe to say that there exists a select few fund managers who sold off their positions entirely last quarter. At the top of the heap, Alex Sacerdote’s Whale Rock Capital Management sold off the largest investment of the 700 funds watched by Insider Monkey, valued at close to $64.1 million in stock, and George Soros’s Soros Fund Management was right behind this move, as the fund cut about $16.6 million worth. These moves are intriguing to say the least, as total hedge fund interest fell by 1 funds last quarter.

As you can see these stocks had an average of 28.75 hedge funds with bullish positions and the average amount invested in these stocks was $702 million. That figure was $441 million in HUBS’s case. ICU Medical, Inc. (NASDAQ:ICUI) is the most popular stock in this table. On the other hand Genpact Limited (NYSE:G) is the least popular one with only 21 bullish hedge fund positions. Compared to these stocks HubSpot Inc (NYSE:HUBS) is even less popular than G. Considering that hedge funds aren’t fond of this stock in relation to other companies analyzed in this article, it may be a good idea to analyze it in detail and understand why the smart money isn’t behind this stock. This isn’t necessarily bad news. Although it is possible that hedge funds may think the stock is overpriced and view the stock as a short candidate, they may not be very familiar with the bullish thesis. In either case more research is warranted.