Hedge Funds Have Never Been This Bullish On Hawaiian Electric Industries, Inc. (HE)

Does Hawaiian Electric Industries, Inc. (NYSE:HE) represent a good buying opportunity at the moment? Let’s quickly check the hedge fund interest towards the company. Hedge fund firms constantly search out bright intellectuals and highly-experienced employees and throw away millions of dollars on satellite photos and other research activities, so it is no wonder why they tend to generate millions in profits each year. It is also true that some hedge fund players fail inconceivably on some occasions, but net net their stock picks have been generating superior risk-adjusted returns on average over the years.

Hawaiian Electric Industries, Inc. (NYSE:HE) shareholders have witnessed an increase in hedge fund sentiment in recent months. HE was in 17 hedge funds’ portfolios at the end of June. There were 12 hedge funds in our database with HE holdings at the end of the previous quarter. Our calculations also showed that HE isn’t among the 30 most popular stocks among hedge funds (see the video below).

To most traders, hedge funds are assumed to be slow, old financial vehicles of yesteryear. While there are greater than 8000 funds with their doors open at present, We hone in on the top tier of this club, about 750 funds. These hedge fund managers watch over the lion’s share of the hedge fund industry’s total asset base, and by keeping track of their unrivaled equity investments, Insider Monkey has come up with several investment strategies that have historically beaten the broader indices. Insider Monkey’s flagship hedge fund strategy outpaced the S&P 500 index by around 5 percentage points annually since its inception in May 2014. We were able to generate large returns even by identifying short candidates. Our portfolio of short stocks lost 25.7% since February 2017 (through September 30th) even though the market was up more than 33% during the same period. We just shared a list of 10 short targets in our latest quarterly update .

How have hedgies been trading Hawaiian Electric Industries, Inc. (NYSE:HE)?

At the end of the second quarter, a total of 17 of the hedge funds tracked by Insider Monkey held long positions in this stock, a change of 42% from the first quarter of 2019. On the other hand, there were a total of 10 hedge funds with a bullish position in HE a year ago. With the smart money’s sentiment swirling, there exists a select group of noteworthy hedge fund managers who were increasing their stakes considerably (or already accumulated large positions). 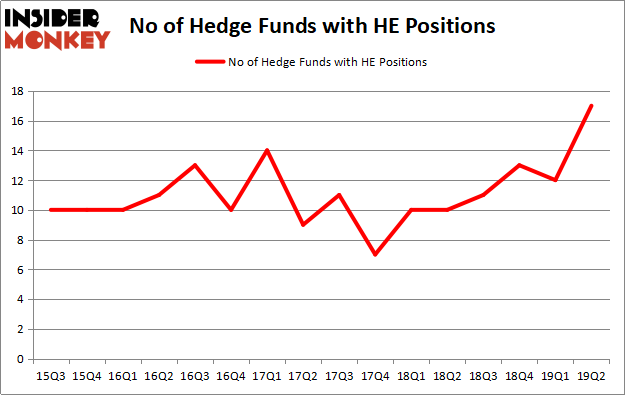 As one would reasonably expect, some big names have jumped into Hawaiian Electric Industries, Inc. (NYSE:HE) headfirst. D E Shaw, managed by D. E. Shaw, assembled the most outsized position in Hawaiian Electric Industries, Inc. (NYSE:HE). D E Shaw had $1.8 million invested in the company at the end of the quarter. Steve Cohen’s Point72 Asset Management also made a $1 million investment in the stock during the quarter. The other funds with new positions in the stock are Dmitry Balyasny’s Balyasny Asset Management, Richard Driehaus’s Driehaus Capital, and Bruce Kovner’s Caxton Associates LP.

As you can see these stocks had an average of 15.75 hedge funds with bullish positions and the average amount invested in these stocks was $240 million. That figure was $147 million in HE’s case. Chegg Inc (NYSE:CHGG) is the most popular stock in this table. On the other hand 51job, Inc. (NASDAQ:JOBS) is the least popular one with only 9 bullish hedge fund positions. Hawaiian Electric Industries, Inc. (NYSE:HE) is not the most popular stock in this group but hedge fund interest is still above average. Our calculations showed that top 20 most popular stocks among hedge funds returned 24.4% in 2019 through September 30th and outperformed the S&P 500 ETF (SPY) by 4 percentage points. Hedge funds were also right about betting on HE, though not to the same extent, as the stock returned 5.5% during the third quarter and outperformed the market as well.