Hedge Funds Have Never Been This Bullish On Guess’, Inc. (GES)

Is Guess’, Inc. (NYSE:GES) a buy here? Investors who are in the know are buying. The number of long hedge fund positions advanced by 2 lately. Our calculations also showed that GES isn’t among the 30 most popular stocks among hedge funds. GES was in 19 hedge funds’ portfolios at the end of December. There were 17 hedge funds in our database with GES holdings at the end of the previous quarter.

At Q4’s end, a total of 19 of the hedge funds tracked by Insider Monkey held long positions in this stock, a change of 12% from one quarter earlier. On the other hand, there were a total of 17 hedge funds with a bullish position in GES a year ago. With hedge funds’ sentiment swirling, there exists a select group of notable hedge fund managers who were adding to their holdings substantially (or already accumulated large positions). 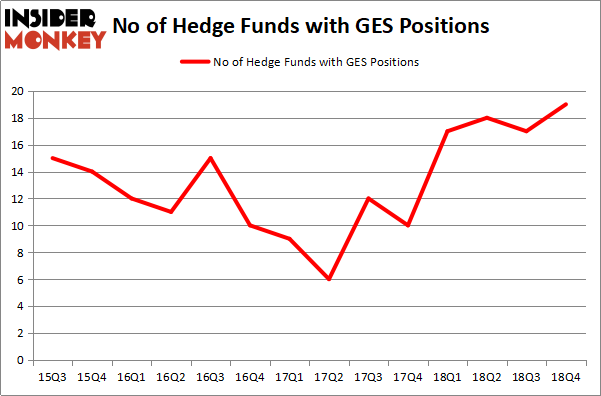 When looking at the institutional investors followed by Insider Monkey, Maverick Capital, managed by Lee Ainslie, holds the biggest position in Guess’, Inc. (NYSE:GES). Maverick Capital has a $28.1 million position in the stock, comprising 0.4% of its 13F portfolio. Sitting at the No. 2 spot is Balyasny Asset Management, managed by Dmitry Balyasny, which holds a $20.1 million position; 0.1% of its 13F portfolio is allocated to the stock. Some other members of the smart money that are bullish include Ken Griffin’s Citadel Investment Group, Steven Baughman’s Divisar Capital and Paul Marshall and Ian Wace’s Marshall Wace LLP.

As one would reasonably expect, key hedge funds have jumped into Guess’, Inc. (NYSE:GES) headfirst. Divisar Capital, managed by Steven Baughman, established the biggest position in Guess’, Inc. (NYSE:GES). Divisar Capital had $11.9 million invested in the company at the end of the quarter. Ray Dalio’s Bridgewater Associates also made a $0.2 million investment in the stock during the quarter. The only other fund with a new position in the stock is Andrew Feldstein and Stephen Siderow’s Blue Mountain Capital.

As you can see these stocks had an average of 16.75 hedge funds with bullish positions and the average amount invested in these stocks was $140 million. That figure was $107 million in GES’s case. iRhythm Technologies, Inc. (NASDAQ:IRTC) is the most popular stock in this table. On the other hand Eagle Bancorp, Inc. (NASDAQ:EGBN) is the least popular one with only 12 bullish hedge fund positions. Guess’, Inc. (NYSE:GES) is not the most popular stock in this group but hedge fund interest is still above average. This is a slightly positive signal but we’d rather spend our time researching stocks that hedge funds are piling on. Our calculations showed that top 15 most popular stocks) among hedge funds returned 24.2% through April 22nd and outperformed the S&P 500 ETF (SPY) by more than 7 percentage points. Unfortunately GES wasn’t nearly as popular as these 15 stock and hedge funds that were betting on GES were disappointed as the stock returned -18.9% and underperformed the market. If you are interested in investing in large cap stocks with huge upside potential, you should check out the top 15 most popular stocks) among hedge funds as 13 of these stocks already outperformed the market this year.

Did Hedge Funds Drop The Ball On Yext, Inc. (YEXT) ?
Monthly Newsletter Strategy
Download a free copy of our newsletter and see the details inside!
Hedge Fund Resource Center
Related News
Is Guess’, Inc. (GES) A Good Stock To Buy? 33 Fresh Stories From The World Of Finance Today 5 Top Contrarian Stocks Should You Buy Guess?, Inc. (GES)? Here’s Why These Five Stocks Are on the Move What Hedge Funds Think About Popular Apparel Stocks Why Ctrip, Jabil, and Three Other Stocks Are Trading Down Today 18 Cute Tinder Bio Examples (Female) 20 Clever Bumble Bios for Guys 15 Most Physically Demanding Olympic Sports
Billionaire Hedge Funds