We can judge whether Great Ajax Corp (NYSE:AJX) is a good investment right now by following the lead of some of the best investors in the world and piggybacking their ideas. There’s no better way to get these firms’ immense resources and analytical capabilities working for us than to follow their lead into their best ideas. While not all of these picks will be winners, our research shows that these picks historically outperformed the market when we factor in known risk factors.

Is Great Ajax Corp (NYSE:AJX) a bargain? The best stock pickers are in an optimistic mood. The number of long hedge fund bets improved by 4 recently. Our calculations also showed that AJX isn’t among the 30 most popular stocks among hedge funds (see the video below).

In addition to following the biggest hedge funds for investment ideas, we also share stock pitches from conferences, investor letters and other sources  like this one where the fund manager is talking about two under the radar 1000% return potential stocks: first one in internet infrastructure and the second in the heart of advertising market. We use hedge fund buy/sell signals to determine whether to conduct in-depth analysis of these stock ideas which take days. Let’s analyze the key hedge fund action encompassing Great Ajax Corp (NYSE:AJX).

What does smart money think about Great Ajax Corp (NYSE:AJX)?

At the end of the second quarter, a total of 8 of the hedge funds tracked by Insider Monkey were bullish on this stock, a change of 100% from the previous quarter. On the other hand, there were a total of 3 hedge funds with a bullish position in AJX a year ago. With hedgies’ sentiment swirling, there exists a few key hedge fund managers who were adding to their holdings substantially (or already accumulated large positions). 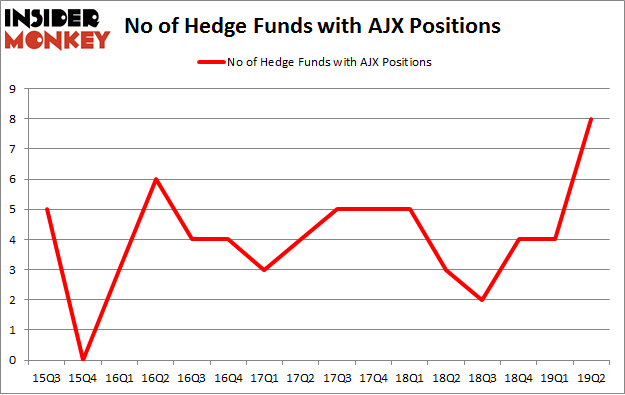 More specifically, Almitas Capital was the largest shareholder of Great Ajax Corp (NYSE:AJX), with a stake worth $7.8 million reported as of the end of March. Trailing Almitas Capital was Shoals Capital Management, which amassed a stake valued at $6.3 million. Renaissance Technologies, Ellington, and Millennium Management were also very fond of the stock, giving the stock large weights in their portfolios.

Now, some big names were breaking ground themselves. Millennium Management, managed by Israel Englander, established the most outsized position in Great Ajax Corp (NYSE:AJX). Millennium Management had $0.4 million invested in the company at the end of the quarter. Michael Gelband’s ExodusPoint Capital also initiated a $0.2 million position during the quarter. The other funds with new positions in the stock are John Overdeck and David Siegel’s Two Sigma Advisors and Roger Ibbotson’s Zebra Capital Management.

As you can see these stocks had an average of 4.5 hedge funds with bullish positions and the average amount invested in these stocks was $19 million. That figure was $17 million in AJX’s case. Xinyuan Real Estate Co., Ltd. (NYSE:XIN) is the most popular stock in this table. On the other hand Hamilton Beach Brands Holding Company (NYSE:HBB) is the least popular one with only 1 bullish hedge fund positions. Compared to these stocks Great Ajax Corp (NYSE:AJX) is more popular among hedge funds. Our calculations showed that top 20 most popular stocks among hedge funds returned 24.4% in 2019 through September 30th and outperformed the S&P 500 ETF (SPY) by 4 percentage points. Hedge funds were also right about betting on AJX as the stock returned 13.2% during Q3 and outperformed the market by an even larger margin. Hedge funds were clearly right about piling into this stock relative to other stocks with similar market capitalizations.