Hedge Funds Have Never Been This Bullish On Genesco Inc. (GCO)

It was a rough fourth quarter for many hedge funds, which were naturally unable to overcome the big dip in the broad market, as the S&P 500 fell by about 4.8% during 2018 and average hedge fund losing about 1%. The Russell 2000, composed of smaller companies, performed even worse, trailing the S&P by more than 6 percentage points, as investors fled less-known quantities for safe havens. This was the case with hedge funds, who we heard were pulling money from the market amid the volatility, which included money from small-cap stocks, which they invest in at a higher rate than other investors. This action contributed to the greater decline in these stocks during the tumultuous period. We will study how this market volatility affected their sentiment towards Genesco Inc. (NYSE:GCO) during the quarter below.

Genesco Inc. (NYSE:GCO) was in 22 hedge funds’ portfolios at the end of December. GCO has experienced an increase in enthusiasm from smart money in recent months. There were 19 hedge funds in our database with GCO holdings at the end of the previous quarter. Our calculations also showed that gco isn’t among the 30 most popular stocks among hedge funds.

In the eyes of most shareholders, hedge funds are seen as underperforming, outdated investment vehicles of the past. While there are more than 8000 funds trading at present, Our experts look at the aristocrats of this group, about 750 funds. It is estimated that this group of investors shepherd the lion’s share of the hedge fund industry’s total capital, and by tailing their best stock picks, Insider Monkey has deciphered numerous investment strategies that have historically beaten the market. Insider Monkey’s flagship hedge fund strategy outstripped the S&P 500 index by nearly 5 percentage points a year since its inception in May 2014 through early November 2018. We were able to generate large returns even by identifying short candidates. Our portfolio of short stocks lost 27.5% since February 2017 (through March 12th) even though the market was up nearly 25% during the same period. We just shared a list of 6 short targets in our latest quarterly update and they are already down an average of 6% in less than a month.

What does the smart money think about Genesco Inc. (NYSE:GCO)? 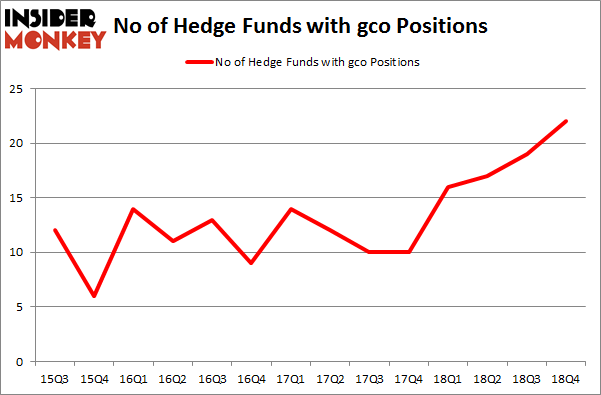 The largest stake in Genesco Inc. (NYSE:GCO) was held by Legion Partners Asset Management, which reported holding $35 million worth of stock at the end of December. It was followed by Winton Capital Management with a $11.6 million position. Other investors bullish on the company included Arrowstreet Capital, Maverick Capital, and AQR Capital Management.

As one would reasonably expect, some big names were breaking ground themselves. Winton Capital Management, managed by David Harding, assembled the most valuable position in Genesco Inc. (NYSE:GCO). Winton Capital Management had $11.6 million invested in the company at the end of the quarter. Steve Cohen’s Point72 Asset Management also initiated a $3.6 million position during the quarter. The following funds were also among the new GCO investors: Ken Griffin’s Citadel Investment Group, Minhua Zhang’s Weld Capital Management, and Paul Tudor Jones’s Tudor Investment Corp.