Hedge Funds Have Never Been This Bullish On Flex Ltd. (FLEX)

Flex Ltd. (NASDAQ:FLEX) shareholders have witnessed an increase in activity from the world’s largest hedge funds of late. Our calculations also showed that FLEX isn’t among the 30 most popular stocks among hedge funds (see the video below).

What does smart money think about Flex Ltd. (NASDAQ:FLEX)?

At Q2’s end, a total of 34 of the hedge funds tracked by Insider Monkey were long this stock, a change of 26% from the previous quarter. Below, you can check out the change in hedge fund sentiment towards FLEX over the last 16 quarters. With hedge funds’ positions undergoing their usual ebb and flow, there exists an “upper tier” of noteworthy hedge fund managers who were adding to their holdings meaningfully (or already accumulated large positions). 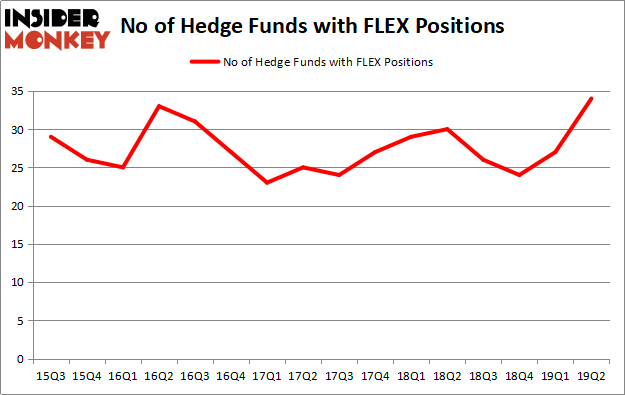 The largest stake in Flex Ltd. (NASDAQ:FLEX) was held by Glenview Capital, which reported holding $185 million worth of stock at the end of March. It was followed by Citadel Investment Group with a $170.1 million position. Other investors bullish on the company included D E Shaw, Iridian Asset Management, and Pzena Investment Management.

Consequently, key hedge funds were leading the bulls’ herd. Iridian Asset Management, managed by David Cohen and Harold Levy, created the most valuable position in Flex Ltd. (NASDAQ:FLEX). Iridian Asset Management had $156.1 million invested in the company at the end of the quarter. Kevin Cottrell and Chris LaSusa’s KCL Capital also initiated a $23.9 million position during the quarter. The other funds with new positions in the stock are Benjamin A. Smith’s Laurion Capital Management, Michael Gelband’s ExodusPoint Capital, and Peter S. Park’s Park West Asset Management.

As you can see these stocks had an average of 22.25 hedge funds with bullish positions and the average amount invested in these stocks was $697 million. That figure was $994 million in FLEX’s case. Nexstar Media Group, Inc. (NASDAQ:NXST) is the most popular stock in this table. On the other hand Shell Midstream Partners LP (NYSE:SHLX) is the least popular one with only 5 bullish hedge fund positions. Flex Ltd. (NASDAQ:FLEX) is not the most popular stock in this group but hedge fund interest is still above average. Our calculations showed that top 20 most popular stocks among hedge funds returned 24.4% in 2019 through September 30th and outperformed the S&P 500 ETF (SPY) by 4 percentage points. Hedge funds were also right about betting on FLEX as the stock returned 9.4% during the third quarter and outperformed the market. Hedge funds were rewarded for their relative bullishness.

Hedge Funds Are Buying ArcBest Corp (ARCB)
Monthly Newsletter Strategy
Download a free copy of our newsletter and see the details inside!
Hedge Fund Resource Center
Related News
Is Flex Ltd. (FLEX) A Good Stock To Buy ? Did Hedge Funds Drop The Ball On Flex Ltd. (FLEX) ? Flex Ltd. (FLEX): This Hedge Fund Believes It Could Triple in Value Over the Next 1-2 Years Billionaire Investors Remain Confident in Flextronics (FLEX) The 25 Biggest Insider Purchases in October Why Synergy Pharmaceuticals, Tesla, Tencent and More Are Trending Best Ideas Pitched by Bill Ackman, David Einhorn & Others at GIBI Conference 11 Largest Auto Insurance Companies In The US In 2019 10 Poorest Cities in America in 2019 8 Lowest Tar and Nicotine Cigarette Brands in 2019
Billionaire Hedge Funds