Hedge Funds Have Never Been This Bullish On Five9 Inc (FIVN)

A market correction in the fourth quarter, spurred by a number of global macroeconomic concerns and rising interest rates ended up having a negative impact on the markets and many hedge funds as a result. The stocks of smaller companies were especially hard hit during this time as investors fled to investments seen as being safer. This is evident in the fact that the Russell 2000 ETF underperformed the S&P 500 ETF by nearly 7 percentage points during the fourth quarter. We also received indications that hedge funds were trimming their positions amid the market volatility and uncertainty, and given their greater inclination towards smaller cap stocks than other investors, it follows that a stronger sell-off occurred in those stocks. Let’s study the hedge fund sentiment to see how those concerns affected their ownership of Five9 Inc (NASDAQ:FIVN) during the quarter.

Is Five9 Inc (NASDAQ:FIVN) worth your attention right now? The smart money is taking an optimistic view. The number of bullish hedge fund bets increased by 3 in recent months. Our calculations also showed that FIVN isn’t among the 30 most popular stocks among hedge funds. FIVN was in 28 hedge funds’ portfolios at the end of December. There were 25 hedge funds in our database with FIVN positions at the end of the previous quarter.

In the 21st century investor’s toolkit there are plenty of gauges stock market investors can use to grade stocks. Some of the best gauges are hedge fund and insider trading sentiment. We have shown that, historically, those who follow the best picks of the best hedge fund managers can beat the broader indices by a superb amount (see the details here). 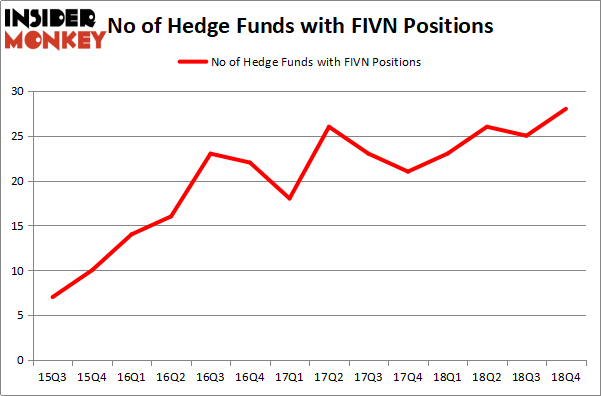 More specifically, Renaissance Technologies was the largest shareholder of Five9 Inc (NASDAQ:FIVN), with a stake worth $97 million reported as of the end of December. Trailing Renaissance Technologies was Alkeon Capital Management, which amassed a stake valued at $87 million. Sylebra Capital Management, Tremblant Capital, and Polar Capital were also very fond of the stock, giving the stock large weights in their portfolios.

With a general bullishness amongst the heavyweights, key hedge funds were breaking ground themselves. Garelick Capital Partners, managed by Bruce Garelick, assembled the biggest position in Five9 Inc (NASDAQ:FIVN). Garelick Capital Partners had $9 million invested in the company at the end of the quarter. George Baxter’s Sabrepoint Capital also initiated a $6.9 million position during the quarter. The following funds were also among the new FIVN investors: Ravee Mehta’s Nishkama Capital, Brandon Haley’s Holocene Advisors, and Bruce Kovner’s Caxton Associates LP.

As you can see these stocks had an average of 22.5 hedge funds with bullish positions and the average amount invested in these stocks was $449 million. That figure was $469 million in FIVN’s case. Sinclair Broadcast Group, Inc. (NASDAQ:SBGI) is the most popular stock in this table. On the other hand BRP Inc. (NASDAQ:DOOO) is the least popular one with only 11 bullish hedge fund positions. Five9 Inc (NASDAQ:FIVN) is not the most popular stock in this group but hedge fund interest is still above average. This is a slightly positive signal but we’d rather spend our time researching stocks that hedge funds are piling on. Our calculations showed that top 15 most popular stocks) among hedge funds returned 24.2% through April 22nd and outperformed the S&P 500 ETF (SPY) by more than 7 percentage points. Unfortunately FIVN wasn’t nearly as popular as these 15 stock and hedge funds that were betting on FIVN were disappointed as the stock returned 15.8% and underperformed the market. If you are interested in investing in large cap stocks with huge upside potential, you should check out the top 15 most popular stocks) among hedge funds as 13 of these stocks already outperformed the market this year.