With the first-quarter round of 13F filings behind us it is time to take a look at the stocks in which some of the best money managers in the world preferred to invest or sell heading into the second quarter. One of these stocks was Federal Realty Investment Trust (NYSE:FRT).

Federal Realty Investment Trust (NYSE:FRT) was in 23 hedge funds’ portfolios at the end of June. FRT investors should pay attention to an increase in enthusiasm from smart money recently. There were 17 hedge funds in our database with FRT holdings at the end of the previous quarter. Our calculations also showed that FRT isn’t among the 30 most popular stocks among hedge funds (view the video below).

In the eyes of most shareholders, hedge funds are perceived as worthless, old financial vehicles of yesteryear. While there are greater than 8000 funds trading at the moment, We hone in on the aristocrats of this group, about 750 funds. It is estimated that this group of investors oversee the majority of all hedge funds’ total capital, and by watching their best picks, Insider Monkey has revealed several investment strategies that have historically outperformed the broader indices. Insider Monkey’s flagship hedge fund strategy exceeded the S&P 500 index by around 5 percentage points per annum since its inception in May 2014. We were able to generate large returns even by identifying short candidates. Our portfolio of short stocks lost 25.7% since February 2017 (through September 30th) even though the market was up more than 33% during the same period. We just shared a list of 10 short targets in our latest quarterly update . 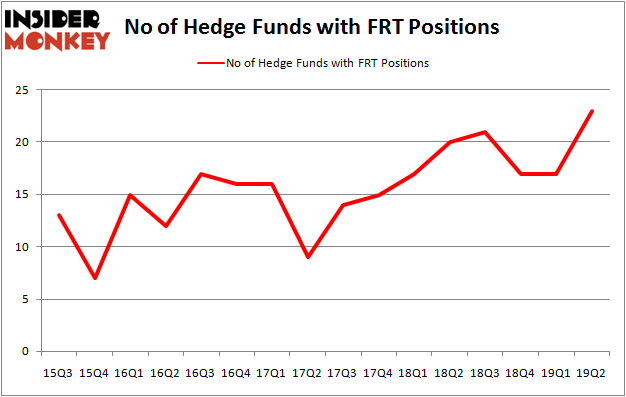 Unlike some fund managers who are betting on Dow reaching 40000 in a year, our long-short investment strategy doesn’t rely on bull markets to deliver double digit returns. We only rely on hedge fund buy/sell signals. Let’s take a gander at the key hedge fund action regarding Federal Realty Investment Trust (NYSE:FRT).

When looking at the institutional investors followed by Insider Monkey, Jeffrey Furber’s AEW Capital Management has the most valuable position in Federal Realty Investment Trust (NYSE:FRT), worth close to $68.2 million, amounting to 2.1% of its total 13F portfolio. The second most bullish fund manager is Carlson Capital, led by Clint Carlson, holding a $43.1 million position; 0.7% of its 13F portfolio is allocated to the stock. Other hedge funds and institutional investors with similar optimism comprise Renaissance Technologies, Ken Griffin’s Citadel Investment Group and Israel Englander’s Millennium Management.

As you can see these stocks had an average of 37.75 hedge funds with bullish positions and the average amount invested in these stocks was $1820 million. That figure was $223 million in FRT’s case. RingCentral Inc (NYSE:RNG) is the most popular stock in this table. On the other hand The Mosaic Company (NYSE:MOS) is the least popular one with only 28 bullish hedge fund positions. Compared to these stocks Federal Realty Investment Trust (NYSE:FRT) is even less popular than MOS. Hedge funds clearly dropped the ball on FRT as the stock delivered strong returns, though hedge funds’ consensus picks still generated respectable returns. Our calculations showed that top 20 most popular stocks among hedge funds returned 24.4% in 2019 through September 30th and outperformed the S&P 500 ETF (SPY) by 4 percentage points. A small number of hedge funds were also right about betting on FRT as the stock returned 6.6% during the third quarter and outperformed the market by an even larger margin.