Hedge Funds Have Never Been This Bullish On eXp World Holdings, Inc. (EXPI)

Our extensive research has shown that imitating the smart money can generate significant returns for retail investors, which is why we track nearly 750 active prominent money managers and analyze their quarterly 13F filings. The stocks that are heavily bought by hedge funds historically outperformed the market, though there is no shortage of high profile failures like hedge funds’ recent losses in Facebook. Let’s take a closer look at what the funds we track think about eXp World Holdings, Inc. (NASDAQ:EXPI) in this article.

eXp World Holdings, Inc. (NASDAQ:EXPI) investors should be aware of an increase in activity from the world’s largest hedge funds in recent months. Our calculations also showed that EXPI isn’t among the 30 most popular stocks among hedge funds.

In today’s marketplace there are several gauges investors use to assess stocks. Some of the most under-the-radar gauges are hedge fund and insider trading interest. We have shown that, historically, those who follow the best picks of the best investment managers can beat their index-focused peers by a very impressive margin (see the details here).

What does the smart money think about eXp World Holdings, Inc. (NASDAQ:EXPI)?

At Q4’s end, a total of 7 of the hedge funds tracked by Insider Monkey were bullish on this stock, a change of 40% from one quarter earlier. Below, you can check out the change in hedge fund sentiment towards EXPI over the last 14 quarters. With hedgies’ sentiment swirling, there exists a few key hedge fund managers who were adding to their stakes considerably (or already accumulated large positions). 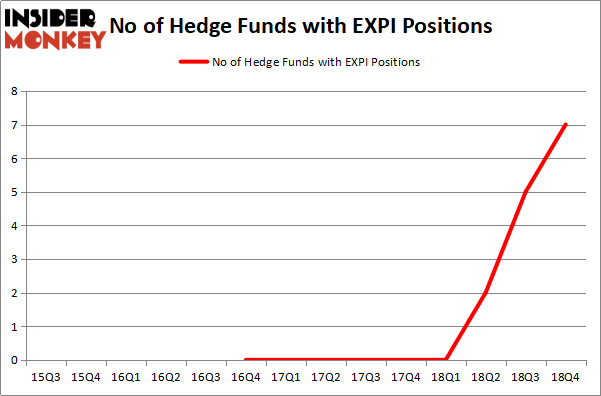 When looking at the institutional investors followed by Insider Monkey, Park West Asset Management, managed by Peter S. Park, holds the most valuable position in eXp World Holdings, Inc. (NASDAQ:EXPI). Park West Asset Management has a $1.2 million position in the stock, comprising 0.1% of its 13F portfolio. Sitting at the No. 2 spot is Arrowstreet Capital, managed by Peter Rathjens, Bruce Clarke and John Campbell, which holds a $0.3 million position; less than 0.1%% of its 13F portfolio is allocated to the company. Other hedge funds and institutional investors with similar optimism consist of Karim Abbadi and Edward McBride’s Centiva Capital, Michael Gelband’s ExodusPoint Capital and Michael Platt and William Reeves’s BlueCrest Capital Mgmt..

Now, key money managers were leading the bulls’ herd. Park West Asset Management, managed by Peter S. Park, assembled the most valuable position in eXp World Holdings, Inc. (NASDAQ:EXPI). Park West Asset Management had $1.2 million invested in the company at the end of the quarter. Karim Abbadi and Edward McBride’s Centiva Capital also initiated a $0.2 million position during the quarter. The only other fund with a brand new EXPI position is Michael Gelband’s ExodusPoint Capital.

As you can see these stocks had an average of 13.75 hedge funds with bullish positions and the average amount invested in these stocks was $67 million. That figure was $2 million in EXPI’s case. e.l.f. Beauty, Inc. (NYSE:ELF) is the most popular stock in this table. On the other hand Scorpio Bulkers Inc (NYSE:SALT) is the least popular one with only 9 bullish hedge fund positions. Compared to these stocks eXp World Holdings, Inc. (NASDAQ:EXPI) is even less popular than SALT. Hedge funds clearly dropped the ball on EXPI as the stock delivered strong returns, though hedge funds’ consensus picks still generated respectable returns. Our calculations showed that top 15 most popular stocks) among hedge funds returned 24.2% through April 22nd and outperformed the S&P 500 ETF (SPY) by more than 7 percentage points. A small number of hedge funds were also right about betting on EXPI as the stock returned 46.9% and outperformed the market by an even larger margin.