Hedge Funds Have Never Been This Bullish On Eventbrite, Inc. (EB)

Out of thousands of stocks that are currently traded on the market, it is difficult to identify those that will really generate strong returns. Hedge funds and institutional investors spend millions of dollars on analysts with MBAs and PhDs, who are industry experts and well connected to other industry and media insiders on top of that. Individual investors can piggyback the hedge funds employing these talents and can benefit from their vast resources and knowledge in that way. We analyze quarterly 13F filings of nearly 750 hedge funds and, by looking at the smart money sentiment that surrounds a stock, we can determine whether it has the potential to beat the market over the long-term. Therefore, let’s take a closer look at what smart money thinks about Eventbrite, Inc. (NYSE:EB).

Is Eventbrite, Inc. (NYSE:EB) an exceptional investment now? Money managers are in an optimistic mood. The number of bullish hedge fund positions increased by 5 in recent months. Our calculations also showed that EB isn’t among the 30 most popular stocks among hedge funds (see the video below). EB was in 21 hedge funds’ portfolios at the end of the second quarter of 2019. There were 16 hedge funds in our database with EB holdings at the end of the previous quarter.

To most shareholders, hedge funds are perceived as slow, outdated investment vehicles of yesteryear. While there are over 8000 funds in operation at the moment, Our researchers look at the bigwigs of this group, around 750 funds. It is estimated that this group of investors control the majority of the smart money’s total asset base, and by observing their highest performing picks, Insider Monkey has deciphered numerous investment strategies that have historically surpassed Mr. Market. Insider Monkey’s flagship hedge fund strategy surpassed the S&P 500 index by around 5 percentage points annually since its inception in May 2014. We were able to generate large returns even by identifying short candidates. Our portfolio of short stocks lost 25.7% since February 2017 (through September 30th) even though the market was up more than 33% during the same period. We just shared a list of 10 short targets in our latest quarterly update . 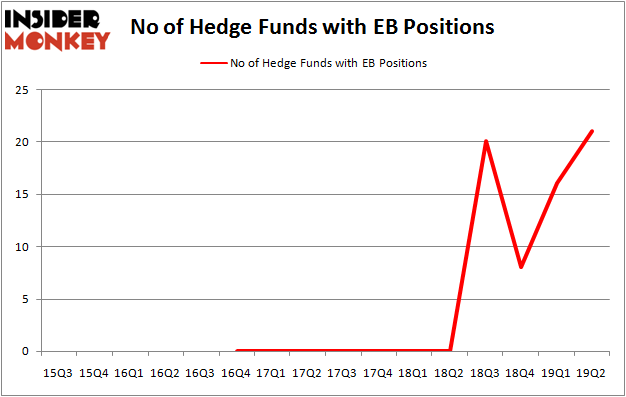 What does smart money think about Eventbrite, Inc. (NYSE:EB)?

At Q2’s end, a total of 21 of the hedge funds tracked by Insider Monkey were long this stock, a change of 31% from one quarter earlier. By comparison, 0 hedge funds held shares or bullish call options in EB a year ago. With hedgies’ sentiment swirling, there exists a select group of noteworthy hedge fund managers who were boosting their holdings considerably (or already accumulated large positions).

When looking at the institutional investors followed by Insider Monkey, Tiger Global Management LLC, managed by Chase Coleman, holds the most valuable position in Eventbrite, Inc. (NYSE:EB). Tiger Global Management LLC has a $135.2 million position in the stock, comprising 0.7% of its 13F portfolio. Coming in second is Michael Sidhom of Immersion Capital, with a $57.8 million position; the fund has 9.1% of its 13F portfolio invested in the stock. Remaining hedge funds and institutional investors with similar optimism encompass Michael Pausic’s Foxhaven Asset Management, Bill Miller’s Miller Value Partners and Mark Moore’s ThornTree Capital Partners.

With a general bullishness amongst the heavyweights, some big names were breaking ground themselves. Immersion Capital, managed by Michael Sidhom, established the most outsized position in Eventbrite, Inc. (NYSE:EB). Immersion Capital had $57.8 million invested in the company at the end of the quarter. Bill Miller’s Miller Value Partners also made a $26.8 million investment in the stock during the quarter. The other funds with new positions in the stock are David Atterbury’s Whetstone Capital Advisors, Chuck Royce’s Royce & Associates, and Anand Parekh’s Alyeska Investment Group.

As you can see these stocks had an average of 14.75 hedge funds with bullish positions and the average amount invested in these stocks was $117 million. That figure was $310 million in EB’s case. WW International, Inc. (NASDAQ:WW) is the most popular stock in this table. On the other hand Archrock, Inc. (NYSE:AROC) is the least popular one with only 8 bullish hedge fund positions. Eventbrite, Inc. (NYSE:EB) is not the most popular stock in this group but hedge fund interest is still above average. Our calculations showed that top 20 most popular stocks among hedge funds returned 24.4% in 2019 through September 30th and outperformed the S&P 500 ETF (SPY) by 4 percentage points. Hedge funds were also right about betting on EB as the stock returned 9.3% during the third quarter and outperformed the market. Hedge funds were rewarded for their relative bullishness.