Our extensive research has shown that imitating the smart money can generate significant returns for retail investors, which is why we track nearly 750 active prominent money managers and analyze their quarterly 13F filings. The stocks that are heavily bought by hedge funds historically outperformed the market, though there is no shortage of high profile failures like hedge funds’ 2018 losses in Facebook and Apple. Let’s take a closer look at what the funds we track think about Enphase Energy Inc (NASDAQ:ENPH) in this article.

Is Enphase Energy Inc (NASDAQ:ENPH) worth your attention right now? Money managers are in a bullish mood. The number of long hedge fund positions moved up by 1 recently. Our calculations also showed that ENPH isn’t among the 30 most popular stocks among hedge funds (see the video below). 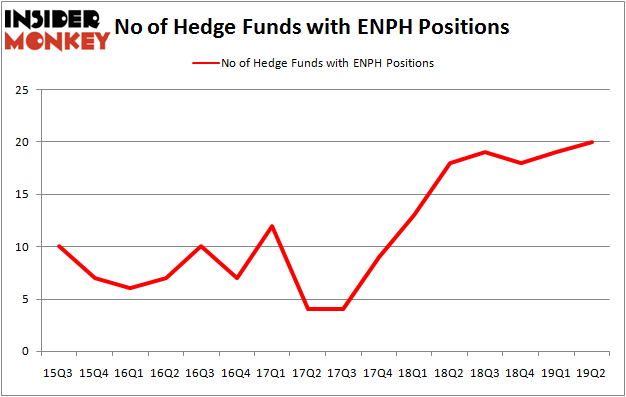 As you can see these stocks had an average of 17.75 hedge funds with bullish positions and the average amount invested in these stocks was $265 million. That figure was $299 million in ENPH’s case. Insmed Incorporated (NASDAQ:INSM) is the most popular stock in this table. On the other hand United Community Banks Inc (NASDAQ:UCBI) is the least popular one with only 12 bullish hedge fund positions. Enphase Energy Inc (NASDAQ:ENPH) is not the most popular stock in this group but hedge fund interest is still above average. Our calculations showed that top 20 most popular stocks among hedge funds returned 24.4% in 2019 through September 30th and outperformed the S&P 500 ETF (SPY) by 4 percentage points. Hedge funds were also right about betting on ENPH as the stock returned 21.9% during the third quarter and outperformed the market. Hedge funds were rewarded for their relative bullishness.