Hedge Funds Have Never Been This Bullish On EnCana Corporation (ECA)

EnCana Corporation (NYSE:ECA) investors should be aware of an increase in hedge fund sentiment recently. Our calculations also showed that eca isn’t among the 30 most popular stocks among hedge funds. 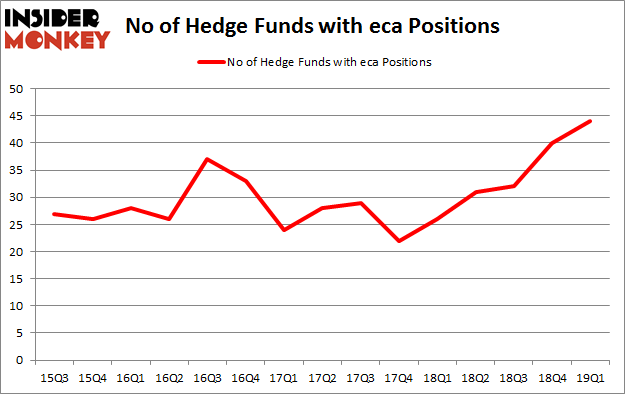 Of the funds tracked by Insider Monkey, Point72 Asset Management, managed by Steve Cohen, holds the biggest position in EnCana Corporation (NYSE:ECA). Point72 Asset Management has a $259.1 million position in the stock, comprising 1.2% of its 13F portfolio. Sitting at the No. 2 spot is Israel Englander of Millennium Management, with a $159.5 million position; 0.2% of its 13F portfolio is allocated to the company. Remaining peers that are bullish comprise John Overdeck and David Siegel’s Two Sigma Advisors, Andy Redleaf’s Whitebox Advisors and Dmitry Balyasny’s Balyasny Asset Management.

Consequently, key money managers have been driving this bullishness. Alyeska Investment Group, managed by Anand Parekh, assembled the most valuable position in EnCana Corporation (NYSE:ECA). Alyeska Investment Group had $32.2 million invested in the company at the end of the quarter. William Harnisch’s Peconic Partners LLC also made a $21.7 million investment in the stock during the quarter. The other funds with new positions in the stock are Brad Dunkley and Blair Levinsky’s Waratah Capital Advisors, Wayne Cooperman’s Cobalt Capital Management, and Joel Greenblatt’s Gotham Asset Management.