Hedge Funds Have Never Been This Bullish On EDAP TMS S.A. (EDAP)

The first quarter was a breeze as Powell pivoted, and China seemed eager to reach a deal with Trump. Both the S&P 500 and Russell 2000 delivered very strong gains as a result, with the Russell 2000, which is composed of smaller companies, outperforming the large-cap stocks slightly during the first quarter. Unfortunately sentiment shifted in May and August as this time China pivoted and Trump put more pressure on China by increasing tariffs. Fourth quarter brought optimism to the markets and hedge funds’ top 20 stock picks performed spectacularly in this volatile environment. These stocks delivered a total gain of 37.4% through the end of November, vs. a gain of 27.5% for the S&P 500 ETF. In this article we will look at how this market volatility affected the sentiment of hedge funds towards EDAP TMS S.A. (NASDAQ:EDAP), and what that likely means for the prospects of the company and its stock.

Is EDAP TMS S.A. (NASDAQ:EDAP) an exceptional investment now? Hedge funds are taking a bullish view. The number of long hedge fund positions increased by 2 recently. Our calculations also showed that EDAP isn’t among the 30 most popular stocks among hedge funds (click for Q3 rankings and see the video below for Q2 rankings).

We leave no stone unturned when looking for the next great investment idea. For example Discover is offering this insane cashback card, so we look into shorting the stock. One of the most bullish analysts in America just put his money where his mouth is. He says, “I’m investing more today than I did back in early 2009.” So we check out his pitch. We read hedge fund investor letters and listen to stock pitches at hedge fund conferences. We even check out this option genius’ weekly trade ideas. This December, we recommended Adams Energy as a one-way bet based on an under-the-radar fund manager’s investor letter and the stock already gained 20 percent. Now we’re going to take a glance at the fresh hedge fund action encompassing EDAP TMS S.A. (NASDAQ:EDAP).

At Q3’s end, a total of 6 of the hedge funds tracked by Insider Monkey were long this stock, a change of 50% from the second quarter of 2019. The graph below displays the number of hedge funds with bullish position in EDAP over the last 17 quarters. With the smart money’s capital changing hands, there exists a few noteworthy hedge fund managers who were increasing their holdings substantially (or already accumulated large positions). 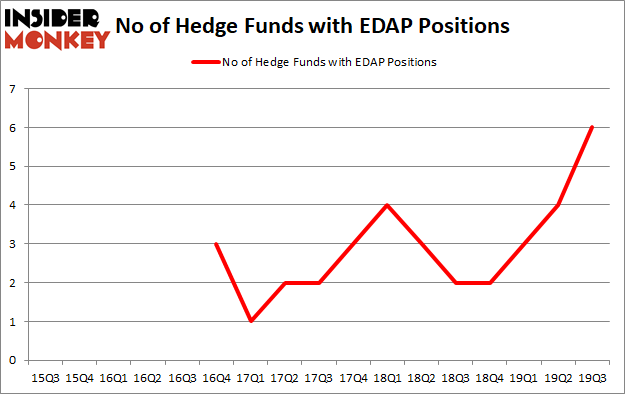 The largest stake in EDAP TMS S.A. (NASDAQ:EDAP) was held by Archon Capital Management, which reported holding $2.7 million worth of stock at the end of September. It was followed by Opaleye Management with a $1.3 million position. Other investors bullish on the company included Manatuck Hill Partners, Diametric Capital, and Springbok Capital. In terms of the portfolio weights assigned to each position Archon Capital Management allocated the biggest weight to EDAP TMS S.A. (NASDAQ:EDAP), around 0.63% of its 13F portfolio. Opaleye Management is also relatively very bullish on the stock, earmarking 0.49 percent of its 13F equity portfolio to EDAP.

As aggregate interest increased, specific money managers have been driving this bullishness. Opaleye Management, managed by James A. Silverman, created the largest position in EDAP TMS S.A. (NASDAQ:EDAP). Opaleye Management had $1.3 million invested in the company at the end of the quarter. Paul Marshall and Ian Wace’s Marshall Wace also made a $0 million investment in the stock during the quarter.

As you can see these stocks had an average of 7 hedge funds with bullish positions and the average amount invested in these stocks was $20 million. That figure was $6 million in EDAP’s case. Strongbridge Biopharma plc (NASDAQ:SBBP) is the most popular stock in this table. On the other hand Nymox Pharmaceutical Corporation (NASDAQ:NYMX) is the least popular one with only 4 bullish hedge fund positions. EDAP TMS S.A. (NASDAQ:EDAP) is not the least popular stock in this group but hedge fund interest is still below average. Our calculations showed that top 20 most popular stocks among hedge funds returned 37.4% in 2019 through the end of November and outperformed the S&P 500 ETF (SPY) by 9.9 percentage points. A small number of hedge funds were also right about betting on EDAP as the stock returned 12.7% during the first two months of Q4 and outperformed the market by an even larger margin.

Hedge Funds Are Dumping Cemex SAB de CV (CX)
Monthly Newsletter Strategy
Download a free copy of our newsletter and see the details inside!
Hedge Fund Resource Center
Related News
Perkins Capital Raises Exposure in EDAP TMS Medical Action Industries (MDCI): Hedge Funds Are Bearish and Insiders Are Bullish, What Should You Do? 11 Companies That Caught Lying To The Public, Deceived Customers 10 Countries with the Highest Coffee Consumption in the World 10 Stocks That Went Up During The 2008 Crash
Billionaire Hedge Funds