Hedge Funds Have Never Been This Bullish On Douglas Emmett, Inc. (DEI)

The financial regulations require hedge funds and wealthy investors that crossed the $100 million equity holdings threshold to file a report that shows their positions at the end of every quarter. Even though it isn’t the intention, these filings to a certain extent level the playing field for ordinary investors. The latest round of 13F filings disclosed the funds’ positions on June 28th. We at Insider Monkey have made an extensive database of nearly 750 of those established hedge funds and famous value investors’ filings. In this article, we analyze how these elite funds and prominent investors traded Douglas Emmett, Inc. (NYSE:DEI) based on those filings.

Is Douglas Emmett, Inc. (NYSE:DEI) an attractive investment now? Money managers are in a bullish mood. The number of bullish hedge fund positions inched up by 5 lately. Our calculations also showed that DEI isn’t among the 30 most popular stocks among hedge funds (view the video below).

If you’d ask most traders, hedge funds are assumed to be unimportant, old financial tools of yesteryear. While there are more than 8000 funds trading at the moment, We choose to focus on the upper echelon of this club, approximately 750 funds. These money managers command most of the hedge fund industry’s total asset base, and by keeping track of their best picks, Insider Monkey has unearthed a number of investment strategies that have historically outrun the S&P 500 index. Insider Monkey’s flagship hedge fund strategy beat the S&P 500 index by around 5 percentage points per annum since its inception in May 2014. We were able to generate large returns even by identifying short candidates. Our portfolio of short stocks lost 25.7% since February 2017 (through September 30th) even though the market was up more than 33% during the same period. We just shared a list of 10 short targets in our latest quarterly update .

Unlike some fund managers who are betting on Dow reaching 40000 in a year, our long-short investment strategy doesn’t rely on bull markets to deliver double digit returns. We only rely on hedge fund buy/sell signals. Let’s check out the fresh hedge fund action surrounding Douglas Emmett, Inc. (NYSE:DEI).

What have hedge funds been doing with Douglas Emmett, Inc. (NYSE:DEI)?

At the end of the second quarter, a total of 19 of the hedge funds tracked by Insider Monkey held long positions in this stock, a change of 36% from one quarter earlier. On the other hand, there were a total of 11 hedge funds with a bullish position in DEI a year ago. With hedgies’ positions undergoing their usual ebb and flow, there exists a few key hedge fund managers who were increasing their holdings considerably (or already accumulated large positions). 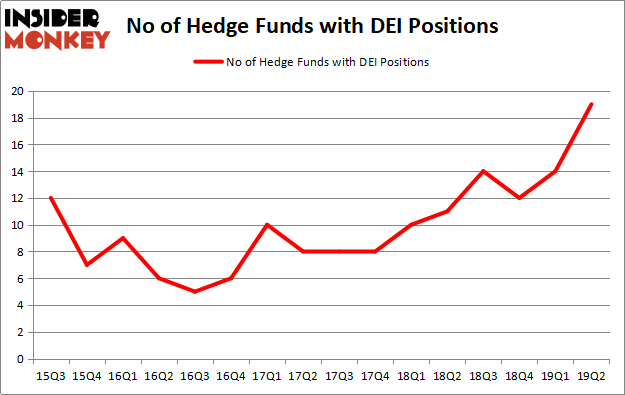 More specifically, Zimmer Partners was the largest shareholder of Douglas Emmett, Inc. (NYSE:DEI), with a stake worth $259.2 million reported as of the end of March. Trailing Zimmer Partners was Renaissance Technologies, which amassed a stake valued at $191.2 million. AEW Capital Management, Millennium Management, and Winton Capital Management were also very fond of the stock, giving the stock large weights in their portfolios.

As you can see these stocks had an average of 27.75 hedge funds with bullish positions and the average amount invested in these stocks was $541 million. That figure was $627 million in DEI’s case. Planet Fitness Inc (NYSE:PLNT) is the most popular stock in this table. On the other hand Hubbell Incorporated (NYSE:HUBB) is the least popular one with only 18 bullish hedge fund positions. Douglas Emmett, Inc. (NYSE:DEI) is not the least popular stock in this group but hedge fund interest is still below average. Our calculations showed that top 20 most popular stocks among hedge funds returned 24.4% in 2019 through September 30th and outperformed the S&P 500 ETF (SPY) by 4 percentage points. A small number of hedge funds were also right about betting on DEI as the stock returned 8.2% during the same time frame and outperformed the market by an even larger margin.