Hedge Funds Have Never Been This Bullish On DMC Global Inc. (BOOM)

Russell 2000 ETF (IWM) lagged the larger S&P 500 ETF (SPY) by more than 10 percentage points since the end of the third quarter of 2018 as investors first worried over the possible ramifications of rising interest rates and the escalation of the trade war with China. The hedge funds and institutional investors we track typically invest more in smaller-cap stocks than an average investor (i.e. only about 60% S&P 500 constituents were among the 500 most popular stocks among hedge funds), and we have seen data that shows those funds paring back their overall exposure. Those funds cutting positions in small-caps is one reason why volatility has increased. In the following paragraphs, we take a closer look at what hedge funds and prominent investors think of DMC Global Inc. (NASDAQ:BOOM) and see how the stock is affected by the recent hedge fund activity.

Is DMC Global Inc. (NASDAQ:BOOM) a buy here? Money managers are betting on the stock. The number of long hedge fund bets improved by 2 in recent months. Our calculations also showed that BOOM isn’t among the 30 most popular stocks among hedge funds (click for Q3 rankings and see the video below for Q2 rankings). BOOM was in 22 hedge funds’ portfolios at the end of September. There were 20 hedge funds in our database with BOOM holdings at the end of the previous quarter.

Unlike the largest US hedge funds that are convinced Dow will soar past 40,000 or the world’s most bearish hedge fund that’s more convinced than ever that a crash is coming, our long-short investment strategy doesn’t rely on bull or bear markets to deliver double digit returns. We only rely on the best performing hedge funds‘ buy/sell signals. Let’s review the fresh hedge fund action regarding DMC Global Inc. (NASDAQ:BOOM).

What have hedge funds been doing with DMC Global Inc. (NASDAQ:BOOM)?

At Q3’s end, a total of 22 of the hedge funds tracked by Insider Monkey were long this stock, a change of 10% from one quarter earlier. Below, you can check out the change in hedge fund sentiment towards BOOM over the last 17 quarters. With the smart money’s capital changing hands, there exists an “upper tier” of notable hedge fund managers who were increasing their holdings meaningfully (or already accumulated large positions). 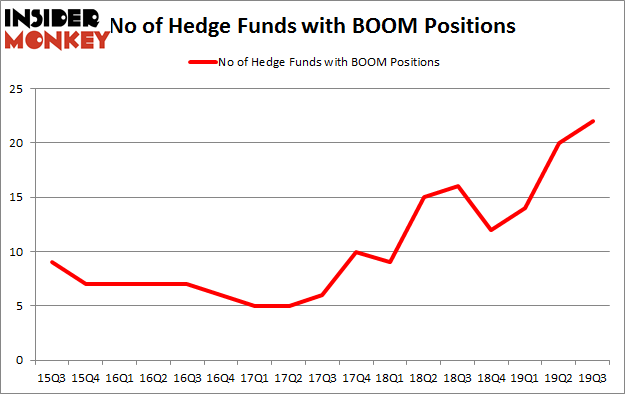 According to publicly available hedge fund and institutional investor holdings data compiled by Insider Monkey, Millennium Management, managed by Israel Englander, holds the biggest position in DMC Global Inc. (NASDAQ:BOOM). Millennium Management has a $27.2 million position in the stock, comprising less than 0.1%% of its 13F portfolio. The second most bullish fund manager is Renaissance Technologies holding a $21.8 million position; the fund has less than 0.1%% of its 13F portfolio invested in the stock. Some other professional money managers with similar optimism contain Mark Broach’s Manatuck Hill Partners, Steve Cohen’s Point72 Asset Management and Paul Marshall and Ian Wace’s Marshall Wace. In terms of the portfolio weights assigned to each position Manatuck Hill Partners allocated the biggest weight to DMC Global Inc. (NASDAQ:BOOM), around 4.68% of its 13F portfolio. Lyon Street Capital is also relatively very bullish on the stock, earmarking 1.74 percent of its 13F equity portfolio to BOOM.

As aggregate interest increased, specific money managers were leading the bulls’ herd. Point72 Asset Management, managed by Steve Cohen, created the largest position in DMC Global Inc. (NASDAQ:BOOM). Point72 Asset Management had $5.2 million invested in the company at the end of the quarter. Paul Marshall and Ian Wace’s Marshall Wace also made a $4.9 million investment in the stock during the quarter. The following funds were also among the new BOOM investors: Ken Griffin’s Citadel Investment Group and Lee Ainslie’s Maverick Capital.

As you can see these stocks had an average of 12.75 hedge funds with bullish positions and the average amount invested in these stocks was $75 million. That figure was $92 million in BOOM’s case. QuinStreet Inc (NASDAQ:QNST) is the most popular stock in this table. On the other hand Preferred Apartment Communities Inc. (NYSE:APTS) is the least popular one with only 6 bullish hedge fund positions. Compared to these stocks DMC Global Inc. (NASDAQ:BOOM) is more popular among hedge funds. Our calculations showed that top 20 most popular stocks among hedge funds returned 37.4% in 2019 through the end of November and outperformed the S&P 500 ETF (SPY) by 9.9 percentage points. Unfortunately BOOM wasn’t nearly as popular as these 20 stocks and hedge funds that were betting on BOOM were disappointed as the stock returned 4.8% during the first two months of the fourth quarter and underperformed the market. If you are interested in investing in large cap stocks with huge upside potential, you should check out the top 20 most popular stocks among hedge funds as 70 percent of these stocks already outperformed the market in Q4.